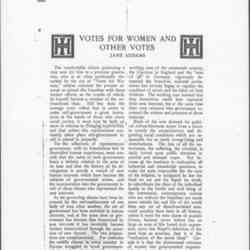 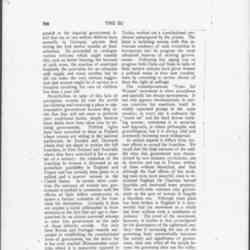 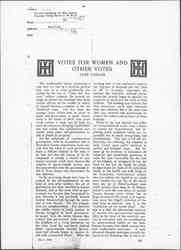 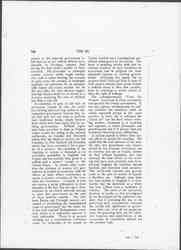 VOTES FOR WOMEN AND
OTHER VOTES

The comfortable citizen possessing a vote won for him in a previous generation, who is so often profoundly disturbed by the cry of "Votes for Women," seldom connects the present attempt to extend the franchise with those former efforts, as the results of which, he himself became a member of the enfranchised class. Still less does the average voter reflect that in order to make self-government a great instrument in the hands of those who crave social justice, it must ever be built up anew in relation to changing experiences, and that unless this readjustment constantly takes place self-government itself is placed in jeopardy.

Yet the adherents of representative government, with its foundations laid in diversified human experiences, must concede that the value of such government bears a definite relation to the area of its base and that the history of its development is merely a record of new human interests which have become the subjects of governmental action, and the incorporation into the government itself of those classes who represented the new interests.

As the governing classes have been increased by the enfranchisement of one body of men after another, the art of government has been enriched in human interests, and at the same time as government has become thus humanized by new interests it has inevitably become further democratized through the accession of new classes. The two propositions are complementary. For centuries the middle classes in every country in Europe struggled to wrest governmental power from the nobles because they insisted that government must consider the problems of a rising commerce; on the other hand the merchants claimed direct representation because government had already begun to concern itself with commercial affairs. When the working men of the nineteenth century, the Chartists in England and the "men of '48" in Germany, vigorously demanded the franchise, national parliaments had already begun to regulate the condition of mines and the labor of little children. The working men insisted that they themselves could best represent their own interests, but at the same time their very entrance into government increased the volume and pressure of those interests.

Much of the new demand for political enfranchisement arises from a desire to remedy the unsatisfactory and degrading social conditions which are responsible for so much wrong-doing and wretchedness. The fate of all the unfortunate, the suffering, the criminal, is daily forced upon public attention in painful and intimate ways. But because of the tendency to nationalize all industrial and commercial questions, to make the state responsible for the care of the helpless, to safeguard by law the food we eat and the liquid we drink, to subordinate the claim of the individual family to the health and well being of the community, contemporary women who are without the franchise are much more outside the real life of the world than any set of disenfranchised men could possibly have been in all history, unless it were the men slaves of ancient Greece, because never before has so large an area of life found civic expression, never has Hegel's definition of the state been so accurate, that it is the "realization of the moral ideal." Certain it is that the phenomenal entrance of women into governmental responsibility in the dawn of the twentieth century is coincident with the consideration by governmental bodies of the basic human interests with which women have been traditionally concerned. A most advanced German statesman recently declared in the Reichstag that it was a reproach [page 2] to the imperial government itself that out of two million children born annually in Germany, 400,000 died during the first twelve months of their existence. He proceeded to catalogue various reforms which might remedy this, such as better housing, the increase of park areas, the erection of municipal hospitals, the provision for an adequate milk supply and many another, but he did not make the very obvious suggestion that women might be of service in a situation involving the care of children less than a year old.

Nevertheless, in spite of this lack of perception, women all over the world are claiming and receiving a place in representative government because they insist that they will not cease to perform their traditional duties, simply because these duties have been taken over by existing governments. Political rights have been accorded to them in Finland where women are sitting in the national parliament, in Sweden and Denmark where they are about to receive the full franchise, in New Zealand and Australia where they have exercised it for a quarter of a century: the extension of the franchise to women is discussed as an immediate possibility in England and France and has actually been given to a million and a quarter women in the United States. In certain other countries the entrance of women into government is pushed in connection with the efforts of their fellow countrymen to secure a further extension of the franchise for themselves. Certainly it does not require a social philosopher to draw attention to the fact that our age is characterized by an almost universal attempt to enter into government on the part of those hitherto outside. Not only have Russia and Portugal recently succeeded in establishing the constitutional form of government, but the desire for it has even reached Mohammedan countries where it is apparently opposed to their philosophy. Persia is at present working out a constitutional revolution under the leadership of the priests as Turkey worked out a constitutional revolution unhampered by the priests. The latter is including women with that inveterate tendency of each revolution to incorporate into its program the most advanced features of existing governments. Following this zigzag line of progress both China and Siam in spite of their eastern customs have given women a political status in their new constitutions by extending to certain classes of them the right of suffrage.

The contemporaneous "Votes for Women" movement is often amorphous and sporadic but always spontaneous. It not only appears simultaneously in various countries but manifests itself in widely separated groups in the same country; in every city it embraces the "smart set" and the hard driven working women; sometimes it is sectarian and dogmatic, at others philosophic and grandiloquent, but it is always vital and constantly becoming more widespread.

In certain aspects it differs from former efforts to extend the franchise. We recall that the final entrance of the middle class into government was characterized by two dramatic revolutions, one in America and one in France, neither of them without bloodshed, and that although the final efforts of the working men were more peaceful, even in restrained England the Chartists burned hayricks and destroyed town property. This world-wide entrance into government on the part of women is happily a bloodless one. Although some glass has been broken in England it is noteworthy that the movement as a whole has been without even a semblance of violence. The creed of the movement, however, is similar to that promulgated by the doctrinaires of the eighteenth century: that if increasing the size of the governing body automatically increases the variety and significance of government, then only when all the people become the governing class can the collective resources and organizations of the community be consistently utilized for the common weal. 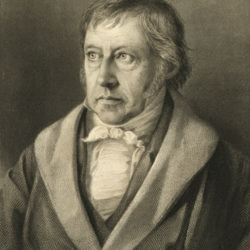 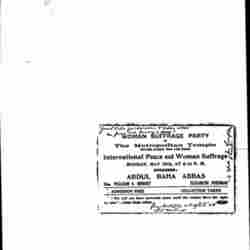 Addams discusses the woman suffrage movement in relation to other movements for the franchise.