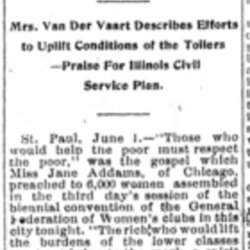 St. Paul, June 1. -- "Those who would help the poor must respect the poor," was the gospel which Miss Jane Addams, of Chicago, preached to 6,000 women assembled in the third day's session of the biennial convention of the General Federation of Women's clubs in this city tonight. "The rich who would lift the burdens of the lower classes must not bring to the work a spirit of patronage and [condescension]," she declared. "They must understand and sympathize with the people of the slums, or else they will do more harm that good."

In a brief address, which opened the program of the evenig, Miss Addams discussed the task to which her life has been devoted, "Settlement Work." "The settlement cannot be a thing apart from its environment," she said. "It must be a part of the slum, become identified with the slum, in order to achieve any results. The people who undertake the responsible task of helping these hopeless sufferers and of fitting immigrants for citizenship must prepare themselves for it in intellect and temperament. If they are not scientific in their methods and broadly democratic in their point of view they would do much better by staying at home. To tamper and experiment with the poor in a diletante manner is worse that no charity at all." 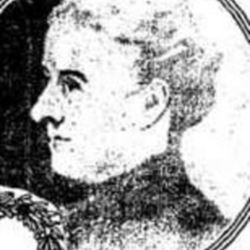 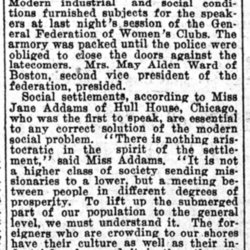 Addams discusses the role that settlements play in improving the conditions of the poor. Only the portion of the article with Addams remarks has been included.