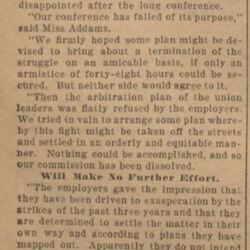 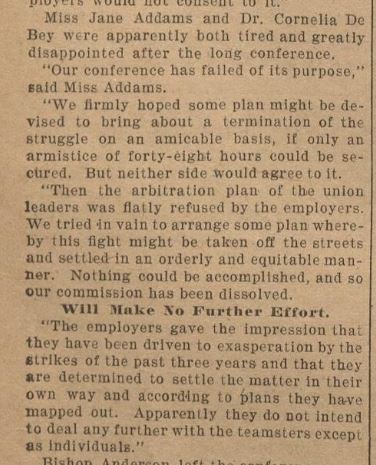 Miss Jane Addams and Dr. Cornelia De Bey were apparently both tired and greatly disappointed after the long conference.

"Our conference has failed of its purpose." said Miss Addams.

"We firmly hoped some plan might be devised to bring about a termination of the struggle on an amicable basis, if only an armistice of forty-eight hours could be secured. But neither side would agree to it.

"Then the arbitration plan of the union leaders was flatly refused by the employers. We tried in vain to arrange some plan whereby this fight might be taken off the streets and settled in an orderly and equitable manner. Nothing could be accomplished, and so our commission has been dissolved.

Will Make No Further Effort.

"The employers gave the impression that they have been driven to exasperation by the strikes of the past three years and that they are determined to settle the matter in their own way and according to plans they have mapped out. Apparently they do not intend to deal any further with the teamsters except as individuals."

Newspaper account of Addams's comments after all-night efforts to settle a teamsters' strike ended in failure. These quotes are part of a larger news article on the negotiations.

A poor quality scan was replaced by a scan from the Boston Public Library.