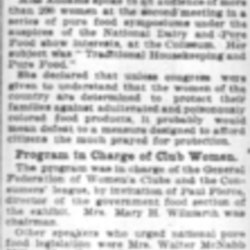 Jane Addams Urges Them to Appeal to Congress to Pass Heyburn Bill.

SPEAKS AT THE COLISEUM

On the ground that it is their traditional business to care for the purity and wholesomeness of the food consumed by the families of the nation, Miss Jane Addams yesterday afternoon made a stirring appeal to the women of the country to urge upon Congress the necessity of passing the Heyburn pure food bill, now pending in the senate.

Miss Addams spoke to an audience of more than 200 women at the second meeting in a series of pure food symposiums under the auspices of the National Dairy and Pure Food show interests at the Coliseum. Her subject was "Traditional Housekeeping and Pure Food."

She declared that unless congress was given to understand that the women of the country are determined to protect their families against adulterated and poisonously colored food products, it probably would mean defeat to a measure designed to afford citizens the much prayed for protection.

Program in Charge of Club Women.

The program was in charge of the General Federation of Women's Clubs and the Consumers league, by invitation of Paul Pierce, director of the government food section of the exhibit. Mrs. Mary H. Wilmarth was chairman.

"With the exception of China, the United States is the only civilized nation without pure food legislation," said Miss Addams. "Such a condition is disgraceful and we must have protection against the adulterated food products with which the country is flooded.

"No European government permits a single food product to be placed on the market without a statement or label showing the contents of the package or the ingredients of which the product is composed. Why cannot we have the same thing here?

"The fact is that we would have had it long ago if the women of our country had demanded it. It is a woman's business to do so. Take any article of food you please and trace it back a hundred years and you will find it was women who orignially selected the materials and did the preparing.

"I feel sure that if the bill now pending in the senate is to become law it will have to come through the aroused sentiment of the women, whose traditional business it is to care for the purity of the food consumed.

"To say that it is none of our business whether people eat poisoned food is not true. It is our business and we must do somethng to protect ourselves against adulterations in food, When we demand this national legislation we are only doing on a large scale what women have been doing individually for a thousand years. In this matter of federal legislation women all over the country must take it up and agitate the question and demand of congress that it give the nation protection." 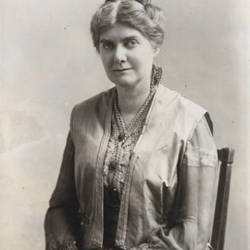 At a joint meeting of the Consumers League and General Federation of Women's Clubs, Addams argues for the passage of the Heyburn Pure Food Bill in Congress.

Portions of the article excerpting other speakers has not been include.