How the Average Citizen Is Ignored in Our System of Government, March 1, 1906 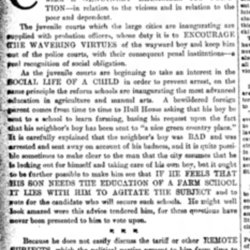 How the Average Citizen Is Ignored In Our System of Government
By JANE ADDAMS, Hull House, Chicago

The juvenile courts which the large cities are inaugurating are supplied with probation officers, whose duties it is to ENCOURAGE THE WAVERING VIRTUES of the wayward boy and to keep him out of the police courts, with their consequent penal institutions -- a real recognition of social obligation.

As the juvenile courts are beginning to take an interest in the SOCIAL LIFE OF A CHILD in order to prevent arrest, on the same principle the reform schools are inaugurating the most advanced education in agriculture and manual arts. A bewildered foreign parent comes from time to time to Hull House asking that his boy be sent to a school to learn farming, basing his request upon the fact that his neighbor's boy has been sent to "a nice green country place." It is carefully explained that the neighbors' boy was BAD and was arrested and sent away on account of his badness, and it is quite possible sometimes to make clear to the man that the city assumes that he is looking out for himself and taking care of his own boy; but it ought to be further possible to make him see that, IF HE FEELS THAT HIS SON NEEDS THE EDUCATION OF A FARM SCHOOL IT LIES WITH HIM TO AGITATE THE SUBJECT and to vote for the candidate who will secure such schools. He might well look amazed were this advice tendered him, for these questions have never been presented to him to vote upon.

Because he does not easily discuss the tariff or other REMOTE SUBJECTS which the political parties present to him from time to time we assume that he is not to be trusted to vote on the education of his child. The ancestors of this same immigrant, from the days of bows and arrows, doubtless taught their children those activities which seemed valuable to them.

Again, we build enormous city hospitals and almshouses for the defective and dependent, but for that great mass of people just beyond the line from which they are constantly recruited we do PRACTICALLY NOTHING. We are afraid of the notion of governmental function which would minister to the primitive needs of the mass of people, although we are quite ready to care for him whom misfortune or disease has made the exception.

IT IS REALLY THE RANK AND FILE, THE AVERAGE CITIZEN, WHO IS IGNORED BY THE GOVERNMENT, WHILE HE WORKS OUT HIS REAL PROBLEMS THROUGH OTHER AGENCIES AND IS SCOLDED FOR STAYING HOME ON ELECTION DAY.

Addams argues that government services let down the poor and the immigrants. This is a shortened version of the "Problems of Municipal Administration,"

Jane Addams, "How the Average Citizen Is Ignored in Our System of Government," Indiana Gazette, March 1, 1906, p. 8.