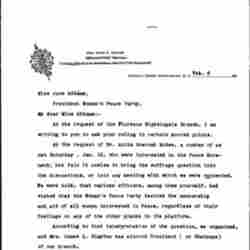 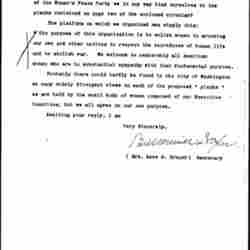 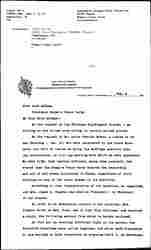 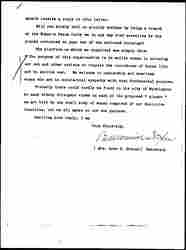 At the request of the Florence Nightingale Branch, I am writing to you to ask your ruling in certain mooted points.

At the request of Dr. Anita Newcomb McGee, a number of us met Saturday, Jan. 16, who were interested in the Peace Movement; but felt it unwise to bring the suffrage question into the discussions, or into any meeting with which we were connected. We were told, that various officers, among them yourself, had stated that the Woman's Peace Party desired the membership and, aid of all women interested in Peace, regardless of their feelings on any of the other planks in the platform.

According to that interpretation of the question, we organized, and Mrs. James L. Slayden was elected President (or Chairman) of our branch.

In order to be absolutely certain of her position, Mrs. Slayden wrote to Mrs. Post, one of your Vice Chairmen; and received a reply, the following extract from which is hereby enclosed.

As that put an entirely different light on the matter, the Executive Committee were called together; and after much discussion it was decided to hold themselves in abeyance until I, as Secretary, [page 2] should receive a reply to this letter.

Will you kindly tell us plainly whether by being a branch of the Woman's Peace Party we in any way bind ourselves to the planks contained on page two of the enclosed circular?

The platform on which we organized was simply this: "The purpose of this organization is to enlist women in arousing our own and other nations to respect the sacredness of human life and to abolish war. We welcome to membership all American women who are in substantial sympathy with that fundamental purpose."

Probably there could hardly be found in the city of Washington so many widely divergent views on each of the proposed "planks" as are held by the small body of women composed of our Executive Committee; but we all agree on our one purpose.

Awaiting your reply, I am 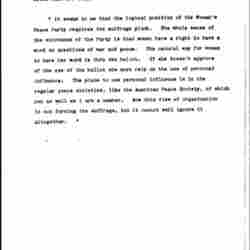 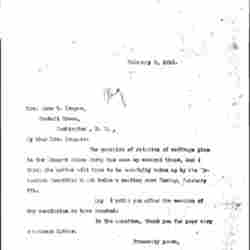 Draper wants to know if the Florence Nightingale branch is bound to all the positions in the Woman's Peace Party platform.