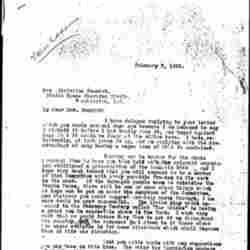 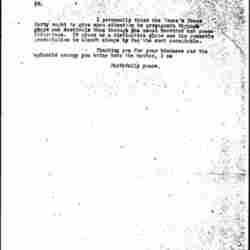 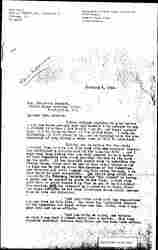 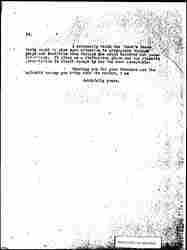 I have delayed replying to your letter which you wrote several days ago because I am ashamed to say I mislaid it before I had really read it, and hoped against hope that it would be found at the office here. I have, reluctantly, at last given it up, and am replying with the disadvantage of only having a vague idea of what it contained.

Nothing can be better for the whole movement than to have you take hold with the splendid organizing ability of a presentation of the Dramatic [side,] and I hope very much indeed that you will consent to be a member of that Committee with every possible freedom in the work in the east. If the Carnegie people seem to subsidize the Trojan Women, there will be one or more other things which we hope can be put on under the auspices of the Committee, and whatever you would suggest and help carry through, I am sure would be most successful. The little play which appeared in the February Century called "War Brides" is having a great run in vaudeville shows in New York. I wish very much that we could induce Mary Shaw to put it on throughout the country, [as?] the response just given to it there shows how eager everyone is for some literature which shall impress them in this war direction.

Won't you write again with any suggestions you may have in this line. The other two Washington members of the Committee are Hazel McKaye and Mrs. White, whom I suppose will act as ex-officio.

Won't you write me again, and believe me when I say that I almost never lose a letter. This loss occurred somewhere between Hull House and the down town office. [page 2]

I personally think the Woman's Peace Party ought to give more attention to propaganda through plays and festivals than through the usual lectures and peace literature. It gives us a distinctive place and the dramatic presentation is almost always by far the most acceptable.

Thanking you for your kindness and the splendid energy you bring into the matter, I am