Secretary to Jane Addams to May Wright Sewall, March 12, 1915 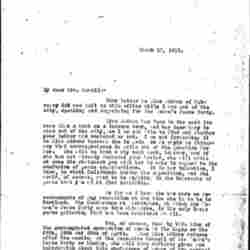 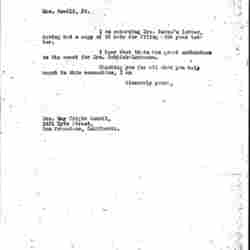 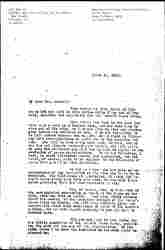 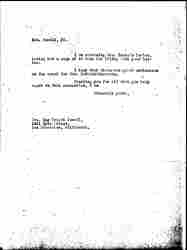 Your letter to Miss Addams of February 23d was left in this office while I was out of the city, speaking and organizing for the Woman's Peace Party.

Miss Addams has been in the east for more than a week on a lecture tour, and her Secretary is also out of the city, so I am not able to find out whether your letter was answered or not. I am not forwarding it to Miss Addams because she is going on so rapid an itinerary that correspondence is quite out of the question for her. She will be back early next week, however, and if she has not already answered your letter, she will write at once the statement you wish her to make in regard to the confusion of peace organizations. It is her intention, I know, to visit California during the exposition, and she would, of course, want to do anything in the interests of peace that you might find desirable.

So far as I know she has made no announcements of any convention at the time she is to be in Portland. The Conference at Washington, at which the Woman's Peace Party came into existence, is the only large peace gathering that has been mentioned at all.

You, of course, know by this time of the contemplated convention of women at The Hague on the 28th, 29th and 30th of April. When Miss Addams returns after the meeting of the Executive Council of the Woman's Peace Party on Sunday, she will have definite plans and information about this conference of women of the neutral nations, and we will report promptly to you all that is decided upon.

Will you not send to Mrs. DeVoe the two little pamphlets of the Woman's Peace Party, explaining the plan and purpose of this organization. If she reads these I am sure the confusion in her mind would be cleared up. [page 2]

I am returning Mrs. DeVoe's letter, having had a copy of it made for filing with your letter.

I hear that there was great enthusiasm on the coast for Mrs. Pethick-Lawrence.

Thanking you for all that [your] help meant in this connection, I am 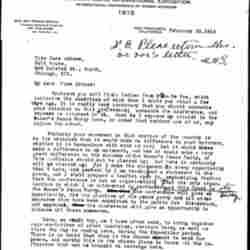 Addams's secretary notes that she is on the East coast and that when she returns, she will write a statement for Sewall.

Enclosed letter from Emma Devoe was not found.