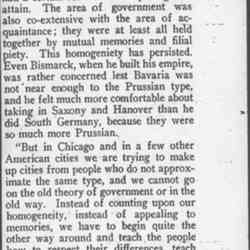 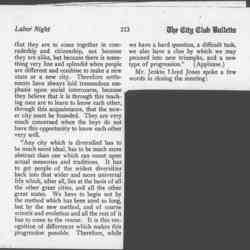 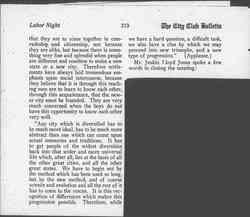 "Every city up to now has had a certain type of citizenship towards which it was approximating its young people. In that beautiful city in which the Athenian Socrates walked about, all the young men had a certain ideal which they sought to attain. The area of government was also co-extensive with the area of acquaintance; they were at least all held together by mutual memories and filial piety. This homogeneity has persisted. Even Bismarck, when he built his empire, was rather concerned lest Bavaria was not near enough to the Prussian type, and he felt much more comfortable about taking in Saxony and Hanover than he did South Germany, because they were so much more Prussian.

"But in Chicago and in a few other American cities we are trying to make up cities from people who do not approximate the same type, and we cannot go on the old theory of government or in the old way. Instead of counting upon our homogeneity, instead of appealing to memories, we have to begin quite the other way around and teach the people how to respect their differences, teach the people that they are to be trusted, [page 2] that they are to come together in comradeship and citizenship, not because they are alike, but because there is something very fine and splendid when people are different and combine to make a new state or a new city. Therefore settlements have always laid tremendous emphasis upon social intercourse, because they believe that it is through this teaching men are to learn to know each other, through this acquaintance, that the newer city must be founded. They are very much concerned when the boys do not have this opportunity to know each other very well.

"Any city which is diversified has to be much more ideal, has to be much more abstract than one which can count upon actual memories and traditions. It has to get people of the widest diversities back into that wider and more universal life which, after all, lies at the basis of all the other great cities, and all the other great states. We have to begin not by the method which has been used so long, but by the new method, and of course science and evolution and all the rest of it has to come to the rescue. It is this recognition of differences which makes this progression possible. Therefore, while we have a hard question, a difficult task, we also have a clue by which we may proceed into new triumphs, and a new type of progression." (Applause.) 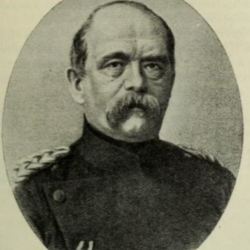 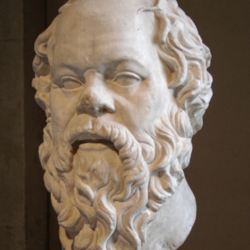 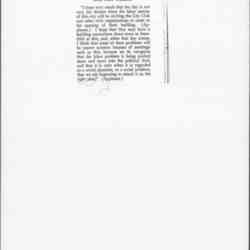 An excerpt from Addams's remarks at a January 12 City Club Housewarming, focused on Civic Associations' Night, where she discusses how civic associations can be bridges to connect diverse communities.