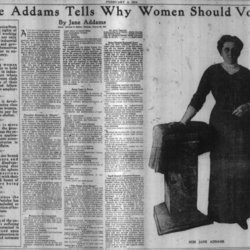 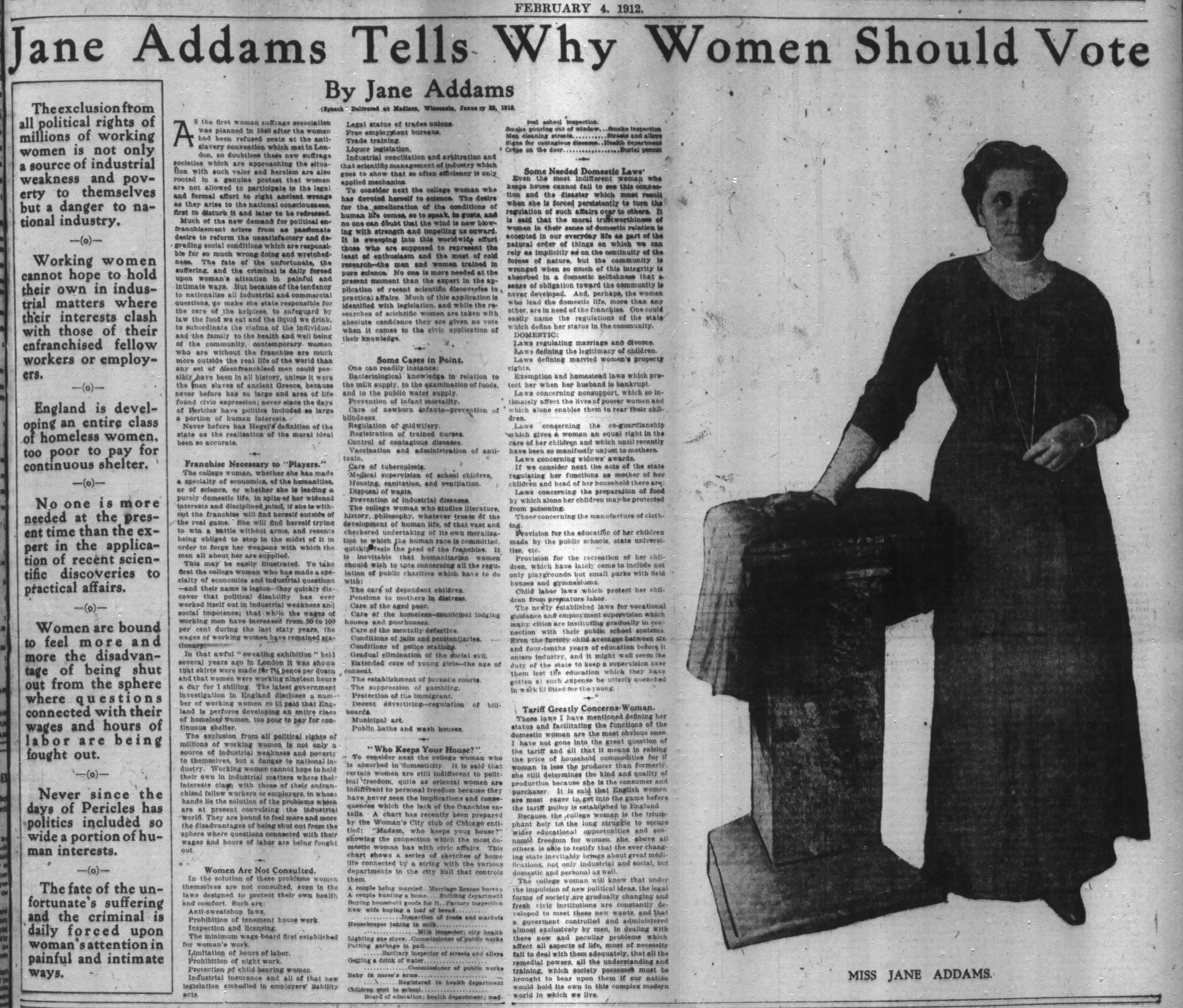 AS the first woman suffrage association was planned in 1840 after the women had been refused meats at the anti-slavery convention which met in London, so doubtless these new suffrage societies which are approaching the situation with such valor and heroism are also rooted in a genuine protest that women are not allowed to participate is the legal and formal effort to right ancient wrongs as they arise to the national consciousness, first to disturb it and later to be redressed.

Much of the new demand for political enfranchisement arises from as passionate desire to reform the unsatisfactory and degrading social conditions which are responsible for so much wrong doing and wretchedness. The fate of the unfortunate, the suffering, and the criminal is daily forced upon woman's attention in painful and intimate ways. But because of the tendency to nationalize all industrial and commercial questions, to make the state responsible for the care of the helpless, to safeguard by law the food we eat and the liquid we drink, to subordinate the claims of the individual and the family to the health and well being of the community, contemporary women who are without the franchise are much more outside the real life of the world than any set of disenfranchised men could possibly have been in all history, unless it were the men slaves of ancient Greece, because never before has so large and area of life found civic expression; never since the days of Pericles have politics included so large a portion of human interests.

Never before has Hegel's definition of the state as the realization of the moral ideal been so accurate.

The college woman, whether she has made a specialty of economics, of the humanities, or of science, or whether she is leading a purely domestic life, in spite of her widened interests and disciplined mind, if she is without the franchise will find herself outside of the real game. She will find herself trying to win a battle without arms, and resents being obliged to stop in the midst of it in order to forge her weapons with which the men all about her are supplied.

This may be easily illustrated. To take first the college woman who has made a specialty of economics and industrial questions -- and their name is legion -- they quickly discover that political disability has ever worked itself out in industrial weakness and social impotence; that while the wages of working men have increased from 50 to 100 per cent during the last sixty years, the wages of working women have remained stationary.

In that awful "sweating exhibition" held several years ago in London it was shown that skirts were made for 7 1/2 pence per dozen and that women were working nineteen hours a day for 1 shilling. The latest government investigation in England discloses a number of working women so ill paid that England is perforce developing an entire class of homeless women, too poor to pay for continuous shelter.

The exclusion from all political rights of millions of working women is not only a source of industrial weakness and poverty to themselves, but a danger to national industry. Working women cannot hope to hold their own in industrial matters where their interests clash with those of their enfranchised fellow workers or employers, in whose hands lie the solution of the problems which are at present convulsing the industrial world. They are bound to feel more and more the disadvantages of being shut out from the sphere where questions connected with their wages and hours of labor are being fought out.

Women Are Not Consulted.

In the solution of these problems women themselves are not consulted, even in the laws designed to protect their own health and comfort. Such are:

The minimum wage board first established for woman's work.

Industrial insurance and all of that new legislation embodied in employers' liability acts.

Industrial conciliation and arbitration and that scientific management of industry which goes to show that so often efficiency is only applied mechanics.

To consider next the college woman who has devoted herself to science. The desire for the amelioration of the conditions of human life comes, so to speak, in gusts, and no one can doubt that the wind is now blowing with strength and impelling us onward. It is sweeping into this worldwide effort those who are supposed to represent the least of enthusiasm and the most of cold research -- the men and women trained in pure science. No one is more needed at the present moment than the expert in the application of recent scientific discoveries to practical affairs. Much of this application is identified with legislation, and while the researches of scientific women are taken with absolute confidence they are given no vote when it comes to the civic application of their knowledge.

Some Cases in Point.

One can readily instance:

Bacteriological knowledge in relation to the milk supply, to the examination of foods, and to the public water supply.

Vaccination and administration of anti-toxic.

The college woman who studies literature, history, philosophy, whatever treats of the development of human life, of that vast and checkered undertaking of its own moralization to which the human race is committed, quickly feels the [speed] of the franchise. It is inevitable that humanitarian women should wish to vote concerning all the regulation of public charities which have to do with:

The care of dependent children.

Pensions to mothers in distress.

Care of the aged poor.

Care of the homeless -- municipal lodging houses and poorhouses.

Care of the mentally defective.

Conditions of jails and penitentiaries.

Gradual elimination of the social evil.

Extended care of young girls -- the age of consent.

The establishment of juvenile courts.

The suppression of gambling.

Protection of the immigrant.

"Who Keeps Your House?"

To consider next the college woman who is absorbed in domesticity. It is said that certain women are still indifferent to political freedom quite as oriental women are indifferent to personal freedom because they have never seen the implications and consequences which the lack of the franchise entails. A chart has recently been prepared by the Woman's City club of Chicago entitled: "Madam, who keeps your house?" showing the connection which the most domestic woman has with civic affairs. This chart shows a series of sketches of home life connected by a string with the various departments in the city hall that controls them.

A couple being married...Marriage license bureau

A couple hunting a home...Building department

New wife buying a loaf of bread.....Inspection of foods and markets

Putting garbage in pail...........Sanitary inspector of streets and alleys

Getting a drink of water......Commissioner of public works

Smoke pouring out of window...Smoke inspection

Crepe on the door......Burial permit

Even the most indifferent woman who keeps house cannot fail to see this connection and the disaster which must result when she is forced persistently to turn the regulation of such affairs over to others. It is said that the moral trustworthiness of woman in their sense of domestic relation is accepted in our everyday life as part of the natural order of things on which we can rely as implicitly as on the continuity of the forces of nature, but the community is wronged when so much of this integrity is absorbed in a domestic selfishness that a sense of obligation toward the community is never developed. And, perhaps, the women who lead the domestic life, more than any other, are in need of the franchise. One could easily name the regulations of the state which define her status in the community.

Laws defining the legitimacy of children.

Laws concerning nonsupport, which so intimately affect the lives of poorer women and which alone enables them to rear their children.

If we consider next the acts of the state regulating her functions as mother of her children and head of her household there are:

Provision for the education of her children made by the public schools, state universities, etc.

Provision for the recreation of her children, which have lately come to include not only playgrounds but small parks with field houses and gymnasiums.

The newly established laws for vocational guidance and employment supervision which many cities are instituting gradually in connection with their public school systems. Even the factory child averages between six and four-tenths years of education before it enters industry, and it might well seem the duty of the state to keep a supervision over them lest the education which they have gotten at such expense he utterly quenched in work till fitted for the young.

These laws I have mentioned defining her status and facilitating the functions of the domestic woman are the most obvious ones. I have not gone into the great question of the tariff and all that it means in raising the price of household commodities for if woman is less the producer than formerly she still determines the kind and quality of production because she is the consumer and purchaser. It is said that English women are most eager to get into the game before the tariff policy is established in England.

Because the college woman is the triumphant heir to the long struggle to secure wider educational opportunities and economic freedom for women, she, above all others, is able to testify that the never changing state inevitably brings about great modifications, not only industrial and social, but domestic and personal as well.

The college woman will know that under the impulsion of new political ideas, the legal forms of society are gradually changing and fresh civic institutions are constantly developed to meet these new wants, and that a government controlled and administered almost exclusively by men, in dealing with these now and peculiar problems which affect all aspects of life, must of necessity fail to deal with them adequately, that all the remedial powers, all the understanding and training, which society possessed must be brought to bear upon them if our nation would hold its own in this complex modern world in which we live. 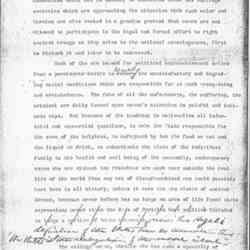 The Chicago Tribune published an excerpted version of Addams' speech on woman suffrage in Madison, Wisconsin, on January 23, 1912.

We have obtained a new image of the article that is easier to read than the one microfilmed.