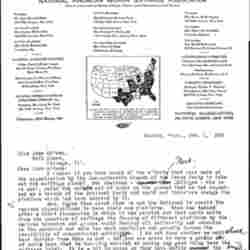 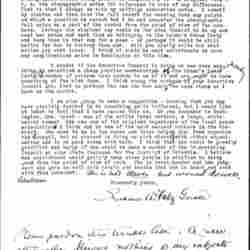 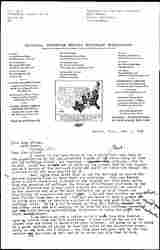 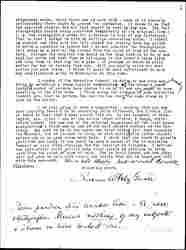 I wonder if you have heard of the efforts that were made at the organization by the Massachusetts branch of the Peace Party to take out the suffrage plank? Our chairman -- who was Miss <Mrs.> Mulligan -- who is an anti, ruled the motion out of order on the ground that we had organized as a branch of the National Party and could not therefore change the platform which had been adopted by it.

Mrs. [Duryea] then moved that we ask the National to permit the various organizations to have their own platforms. This was tabled after a short discussion in which it was pointed out that quite aside from the question of suffrage the framing of different platforms by the various branches and groups would destroy all uniformity and cohesion in the movement and make too much confusion and greatly lessen the possibility of concentrated activity. I do not know whether we will <shall> hear further from this or not -- but you are aware we have a genus of anti here that is terribly worried at seeing any good thing bear the suffrage label. It is a bit humorous as they have bodily assumed <seized upon> the Red Cross work and are carrying it on from the anti-suffrage viewpoint [headquarters] and are disturbing anti-suffrage literature to those who go <in> on Red Cross work <business>.

I am enclosing you a letter which I had from Miss Ezekiel -- upon my return from New York yesterday. I have written her as per enclosed copy and trust it meets with your approval. It seems to me it would be a great mistake of policy to have the notes of our Convention accessible to any save the officers -- for they were not gone over by the Convention and <or> approved in full and it is quite possible that in such [page 2] voluminous notes, where there was so much talk -- some of it scarcely parliamentary there might be ground for confusion. It seems to me that the approved minutes are all that should be used by any one. The full stenographic record being preserved temporarily in its original form -- i.e. the stenographic notes for reference in case of any difference. That is what I always do with my suffrage convention notes. I submit my minutes and then have the full record for running down any points on which a question is raised but I do not consider the stenographic full notes as a part of the record from the point of view of the members. Perhaps the simplest way would be for Miss Ezekiel to do up and seal her notes and mark them as belonging to the Woman's Peace Party and keep them in that way for a year -- or perhaps it would be still better for her to destroy them now. Will you kindly write her what action you want taken. I think it would be most unfortunate to have any complications arise in Washington at this time.

I wonder if the Executive Council is doing or has done anything to establish a cheap popular membership of the Woman's Peace Party? A number of persons have spoken to me of it and are eager to have something of the kind done. I think among the members of your Executive Council Mrs. Post is perhaps the one who has most <nearly> the same view as I have on the matter.

I am also going to make a suggestion -- knowing that you may have possibly decided to do something quite different, but I would like at least to feel that I have passed this on. Do you remember in Washington, Mrs. Speel -- one of the active local workers, a large, white-haired woman? She was one of the original organizers of the local peace association I think and is one of the most earnest workers in the district. She used to be in the union and later helped Mrs. Funk organize the Council, but at present is doing no work directly with either organization and is on good terms with both. I think that she would be greatly gratified and happy if she could be made a member of the [Cooperating] Council or else State Chairman for the District of Columbia. I believe her appointment would gratify many other people in addition to being good from the point of view of work. She is level-headed and has judgment and gets on well with people and beside that she is heart and soul with this movement. <She is not Cleves but would do well, I believe.>

Please pardon this terrible letter. A new stenographer knows nothing of my subjects & I have no time to do it over. 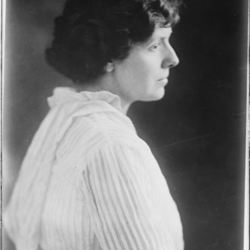 FitzGerald describes a contentious meeting of the Massachusetts branch of the Woman's Peace Party over suffrage.