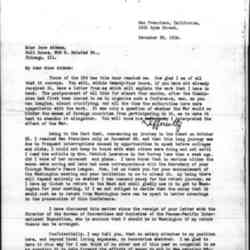 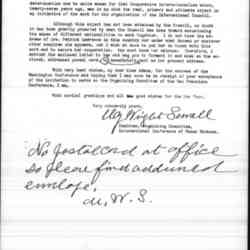 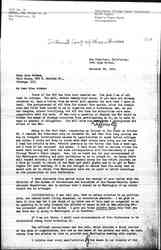 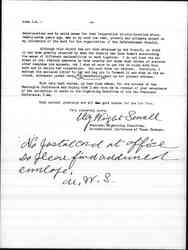 Yours of the 23d has this hour reached me. How glad I am of all that it conveys. You will, within twenty-four hours, if you have not already received it, have a letter from me which will explain the work that I have in hand. The postponement of all this for almost four months, after the Commission had first been issued to me to organize such a Conference, was, as you can imagine, almost crucifying; but all the time the authorities here were sympathetic with the work. It was only a question of whether the War would so hinder the women of foreign countries from participating in it, as to make it best to abandon it altogether. You will know how <differently> definitely I interpreted the effect of the War.

Owing to the fact that, commencing my journey to the Coast on October 23, I reached San Francisco only on November 26, and that this long journey was due to frequent interruptions caused by opportunities to speak before colleges and clubs, I could not keep in touch with what others were doing and not until I read the article by Mrs. Pethick Lawrence in the Survey less than a week ago, did I know of her movement and plans. I have known that in various cities the women were moving and have had some correspondence with the Secretary of your Chicago Women's Peace League. Now, let me thank you for your announcement of the Washington meeting and your invitation to me to attend it. My being there will depend entirely on whether I can command money for the return journey, as I have my ticket to return to the East and shall gladly use it to get to Washington for your meeting, if I am not obliged to decide that the money that it would cost me to return from Washington here can be spent to better advantage in the prosecution of this Conference.

I have discussed this matter since the receipt of your letter with the Director of the Bureau of Conventions and Societies of the Panama-Pacific International Exposition, who is anxious that I should be in Washington if my return thence can be arranged.

Confidentially, I may tell you, that no salary attaches to my position here, and beyond local living expenses, no honorarium whatever. I am glad to have it this way for I can think of no other use of this year so congenial to me as spending it to help forward the efforts of women to aid in the securing of the permanent peace of the world. I give you these private facts only that you may know why my going to Washington is so doubtful.

If I am not there, I shall send announcements of this Conference to be distributed among those attending it.

The official announcement and the call, which includes a brief outline of the plan of organization, are now in the hands of the printer and will, we hope, return from the printer in time to provide your Washington meeting with copies.

I rejoice over every manifestation by the women in our country of the [page 2] determination now to unite women for the Cooperative Internationalism which, twenty-seven years ago, was in my mind the real, primary and ultimate object in my initiative of the work for the organization of the International Council.

Although this object has not been attained by the Council, no doubt it has been greatly promoted by what the Council has done toward accustoming the women of different nationalities to work together. I do not know the address of Mrs. Pethick Lawrence in this country nor under what Bureau or whatever other auspices she appears, but I wish at once to put her in touch with this work and to secure her cooperation. You must know her address. Therefore, I entrust the enclosed letter to her and beg you to forward it and also on the enclosed, addressed postal card, immediately to mail me her present address.

With very best wishes, my dear Miss [Addams], for the success of the Washington Conference and hoping that I may soon be in receipt of your acceptance of the invitation to serve on the Organizing Committee of the San Francisco Conference, I am,

With cordial greetings and all the good wishes for the New Year,

No postal card at office so please find addressed envelope.

Sewall reports on her activities and fears that she will not be able to make the Washington planning meeting.