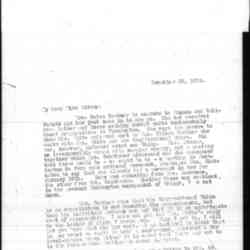 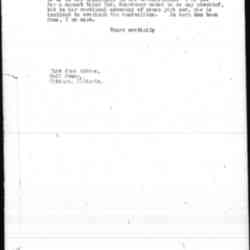 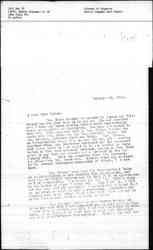 Mrs. Helen [Gardener] is en route to Panama and California and has just been in to see me. She had received your letter and knows nothing except quite incidentally about preparations in Washington. She says the person to whom Mrs. White referred must be Mrs. Gilson Gardner who works with Mrs. White and the Congressional Union. She was, however, informed about one thing. Mrs. Stoner, an irresponsible woman with surplus energy, got a meeting together which Mrs. Schwimmer addressed and she announced that there would be -- or ought to be -- a meeting in Washington to form some national movement, whereupon Mrs. White arose to say that she already had a movement in tow for January 10th. Hers was emanating from Mrs. Lawrence, the other from Mrs. Schwimmer. Whether these are combined in the present Washington management of things, I do not know.

Mrs. [Gardener] says that the Congressional Union as an organization is not managing the arrangements, but that the individual members are and that it is an unfortunate sort of sponsorship. I have not yet had Mrs. White's reply to the letter of which I wrote you. When I get it, I will let you know what she has said. I am inclined to think that in any event we ought to hold a conference, provided a few level-headed women attend it in order that there may not be in the future such working at cross purposes.

Mrs. [Gardener] showed me your letter to her, in which you said that I had requested you to call this meeting. I have already written you that I was much surprised at this idea. I am inclined to think that perhaps Mrs. Schwimmer has been an unfortunate intermediary. Perhaps she told you [page 2] that I did want you to call such a meeting. I do think such a meeting will prove beneficial, but I did not wish to be in the leadership in the arrangements. I do not for a moment think Mrs. Schwimmer meant to do any mischief, but in her emotional advocacy of peace just now, she is inclined to overlook the conventions. No harm has been done, I am sure. 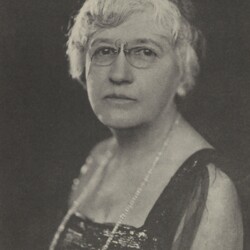 Catt discusses the efforts of Helen Gardener and the Congressional Union and some confusion as to the upcoming peace meeting in Washington.