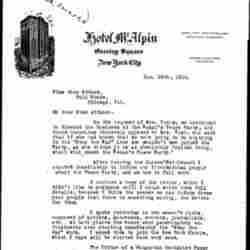 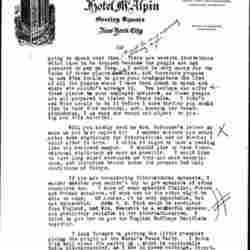 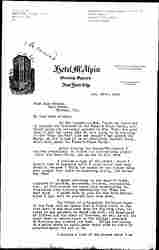 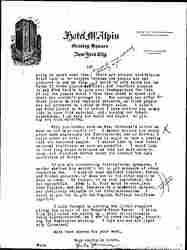 On the request of Mrs. Evans, we continued to discuss the business of the Woman's Peace Party, and found ourselves violently opposed by Mrs. Post, who said that if she had known that we were going to do anything in the "Stop the War" line she wouldn't have joined the Party, as she thinks it is an absolutely foolish thing, which will smash the Woman's Peace Party.

After leaving the Nurses' Settlement I started immediately to inform our International people about the Peace Party, and am now in full work.

I enclose a copy of the letter, which I didn't like to postpone until I could write them full details, because I think the sooner we can inform these poor people that there is something moving, the better for them.

I spoke yesterday in two women's clubs, composed of artists, actresses, writers, journalists, etc. At both places the women were passionately enthusiastic over starting immediately the "Stop the War" work. I asked them to join the New York Circle, which I hope will be started here very soon.

The Editor of a Hungarian Socialist Paper of New York told me lately that a friend wrote to him that when he was sent home from the fighting line, because he was wounded, he found his wife, his daughter of fifteen and his niece of fourteen, as well as all the women down to twelve years in his village, pregnant by Russians who invaded his town. Things are coming to a point where an [earthquake] would seem an event of greatest mercy for all of us.

I enclose a list of the places where I am [page 2] going to speak next time. <It will be sent [separately] directly to you.> There are several invitations which have to be dropped because the people are not prepared to pay my fees.  I would be very sorry for the Cause if these places are <be> lost, and therefore propose to ask Miss Leckie to give your headquarters the list of all the places where I have been asked to speak and where she couldn't arrange it. You perhaps can offer <to> these places to your employed speakers, as these people are all prepared to listen to Peace talks. I didn't ask Miss Leckie to do it before I knew whether you would like to have this material, and, knowing her broadmindedness, I am sure she would not object to giving you this material.

Will you kindly send me Mrs. Hobhouse's letter as soon as you have copied it? I wonder whether you would order some [stationery] for International use or whether I could order it here. I think it ought to have a heading like the enclosed sample. I should like to have International [stationery] as soon as possible. I would like to have long sized envelopes as they are more conspicuous, and therefore better under the present bad mail conditions of Europe.

If you are considering International speakers, I wonder whether you wouldn't try to get speakers of other countries too. I know of some splendid Italian, French and German speakers, of whom one or the other might be able to come. Of course, it is very improbable, but not impossible. Mr <Miss> I. O. Ford would be excellent from England, and Mrs. Swanwick is a wonderful speaker, and absolutely reliable in her internationalism. I tried to get her to get the English Suffrage Pacifists together.

I look forward to getting the little pamphlet giving the origin of the Woman's Peace Party. I think this will clear the matter up, which is continually being misrepresented, as I see in the cuttings, reporting the Washington meeting. I hope you are all right with Cleveland.

With best wishes for your work, 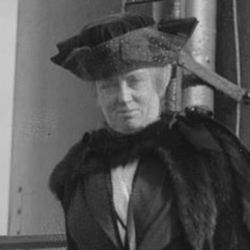 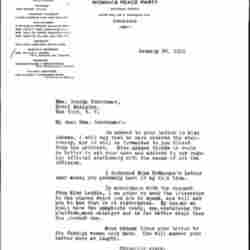 Schwimmer wishes to discuss multiple aspects of the Woman's Peace Party with Addams, including possible lecturers and platform issues.