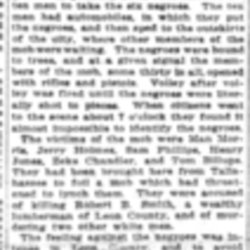 Ten Men Present to the Boy a Forged Telegram and He Gives Prisoners Up.

TIED TO TREES AND SHOT

Were Accused of Murdering a Florida Lumberman and Two Others -- Lynchers Escape In Autos.

Special to the New York Times.

LAKE CITY, Fla., May 21. -- Six negroes suspected of complicity in the murder of a prominent citizen were taken from the jail here early this morning, carried to the suburbs of the city, tied to trees, and riddled with bullets. The negroes were taken out of jail by ten men, who pretended to be officers and who presented the seventeen-year-old son of the Sheriff a false telegram, which ordered him to release the negroes.

The boy had been left in charge of the jail by his father, and thinking the telegram was genuine, he at once allowed the ten men to take the six negroes. The ten men had automobiles , in which they put the negroes, and then sped to the outskirts of the city where other members of the mob were waiting. The negroes were bound to trees, and at a given signal the members of the mob, some thirty in all, opened with rifles and pistols. Volley after volley was fired until the negroes were literally shot to pieces. When the citizens went to the scene about 7 o'clock they found it almost impossible to identify the negroes.

The victims of the mob were Man Morris, Jerry Holmes, Sam Phillips, Henry Jones, Zeke Chandler, and Tom Billups. They had been brought here from Tallahassee to foil a mob which had threatened to lynch them. They were accused of killing Robert B. Smith, a wealthy lumberman of Leon County, and of murdering two other white men.

This feeling against the negroes was intense in Leon County and to avoid lynching the negroes were hurried here a few days ago. It is said that the men who lynched the negroes came from Tallahassee, over 100 miles away, and that they made the trip on Saturday night in automobiles to avoid creating suspicion. They evidently knew that the Sheriff of this country was away and that only his 17-year old son, was in charge of the jail. The message which the leader of the mob showed to the boy purported to be from the Sheriff of Leon County and ordered the delivery of the negroes to the bearer. The boy, just aroused from sleep, complied at once.

The first the people of Lake City knew of trouble was when volley after volley of shots were heard about the sun up. The firing continued for a long time, and when the investigation was made the lynching was disclosed. The men who went to the jail were not disguised, and the boy thinks he could identify some of them.

The Deputy was summoned following the first shooting. As he approached the negro's the preacher opened fire and then fled. Canady fell, mortally wounded. A crowd pursued the negro, caught him in a swamp, and hanged him and filled his body with bullets.

This is the second lynching that Swainsboro has had within ten days, the other being John McLeod, the negro who shot and killed Deputy Sheriff Benton Woods. 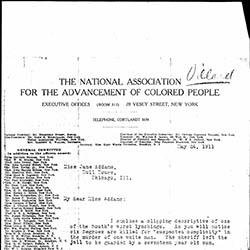 Newspaper report of the lynching of six black men in Lake City, Florida, accused of murdering Robert B. Smith, a prominent white man.

The image on microfilm was incomplete and a scan from the New York Times has been substituted.