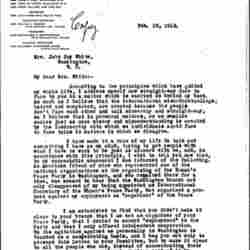 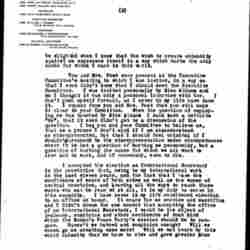 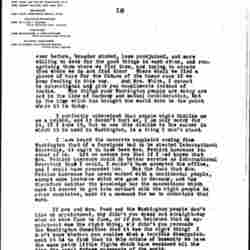 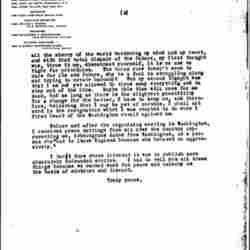 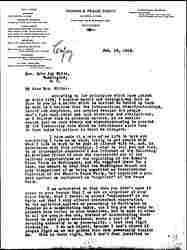 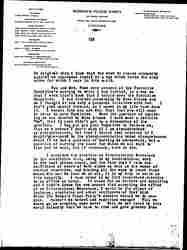 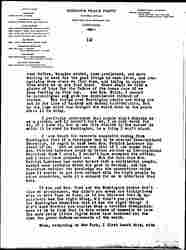 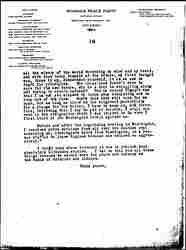 According to the principles which have guided my whole life, I address myself now straight-way face to face to you in a matter which is carried on behind my back. As much as I believe that the international misunderstandings, hatred and suspicion, are created because the people don't face each other and talk sincerely and straight-way, so I believe that in personal matters, or on smaller scales just as much misery and misunderstanding is created by the insincerity with which we individuals avoid face to face talks in matters in which we disagree.

I have made it a rule of my life to talk out everything I have on my mind, trying to get people with whom I have to work to be just as sincere with me, and, in accordance with this principle, I wish to tell you now that, to my unspeakable amazement I was informed of the following. An American friend of mine who represented one of the national organizations at the organizing of the Woman's Peace Party in Washington, and who remained there for a time, was amazed to hear that the Washington branch not only disapproved of my being appointed as International Secretary of the Woman's Peace Party, but organized a protest against my employment as "organizer" of the Peace Party.

I am astonished to find that you didn't make it clear to your branch that I am not an organizer of your Peace Party, that I denied to accept "employment" in the Party and that I only offered independent cooperation. So the agitation against me personally in Washington is founded on a non-existing basis, and I beg you not only to present this letter to your Committee, but to make it clear to all the people who now, instead of concentrating their forces to make peace sentiment, waste a part of it by creating animosity to my personality, -- that they fight wind-mills. I do not object, because I can't object if people fight me on the ground that they personally dislike me. This is their right, but I don't feel justified to [page 2] be slighted when I know that the wish to create animosity against me expresses itself in a way which hurts the only cause for which I care in this world.

You and Mrs. Post were present at the Executive Committee's meeting to which I was invited, in a way so that I even didn't know that I should meet the Executive Committee. I was invited personally by Miss Addams and so I thought it was only a personal interview with her. I don't push myself forward, as I never in my life have done it. I expect from you and Mrs. Post that you will make it clear to your Committee. When the question of employing me was touched by Miss Addams I said such a definite "No," that it even didn't get to a discussion of the question. I beg you and your Committee to believe me, that as a person I don't mind if I am misunderstood or misrepresented, but that I should feel criminal if I wouldn't respond to the misrepresentation under circumstances where it is not a question of hurting me personally, but a question of hurting the cause for which we all want to live and to work, and if necessary, even to die.

I accepted the election as International Secretary in the conviction that, owing to my international work in the last eleven years, and the fact that I have the confidence of women of both sides as well as the women of neutral countries, and knowing all the ways to reach those women who can be reached at all, it is my duty to serve in this capacity. I have never in my life considered election to an office an honor. It means for me service and sacrifice and I didn't dream for one moment that accepting the office of an International Secretary, I would be the object of jealousy, suspicion and other sentiments of that kind which the Woman's Peace Party's mission should be to conquer. Haven't we hatred and suspicion enough? Will we women go on creating some more? Will we not learn by this world calamity that we have to rise and grow greater than [page 3] ever before, broader minded, less [prejudiced], and more willing to seek for the good things in each other, and recognizing them where we find them, and trying to create them where we do not find them? Where shall we find a glance of hope for the future of the human race if we keep feeling in this way. And Mrs. White, I cannot be conventional and give you compliments instead of truths. The things your Washington people are doing are not in the line of harmony and mutual consideration, but in the line which has brought the world down to the point where it is today.

I perfectly understand that people might dislike me as a person, and it doesn't hurt me, I am only sorry for it, if I know it, but to use this dislike in the manner in which it is used in Washington, is a thing I can't stand.

I have heard the concrete complaint coming from Washington that if a foreigner had to be elected International Secretary, it ought to have been Mrs. Pethick Lawrence instead of me. Let me assure you that if I had known that Mrs. Pethick Lawrence could do better service as International Secretary than I could, I wouldn't have accepted the office, and I would have proposed her. But the fact that Mrs. Pethick Lawrence has never worked with a continental people, except some lectures which she gave in Germany, and has therefore neither the knowledge nor the connections which make it easier to get into contact with the right people in other countries, made it a command for me to undertake that work.

If you and Mrs. Post and the Washington people don't like my appointment, why didn't you speak out straight-way when we were face to face, or if you believed that my appointment was the right thing, why didn't you persuade the Washington Committee that it was the right thing? I don't know whether you realize what a terrible disappointment it is to find that in this crisis of humanity we have the same petty little fights which have weakened all the time the great reform movements of the world.

When, returning to New York, I first heard this, with [page 4] all the misery of the world burdening my mind and my heart, and with that total [despair] of the future, my first thought was, throw it up, disconnect yourself, it is no use to fight for principles. The human race doesn't seem to care for its own future, why be a fool in struggling along and trying to create harmony? But my second thought was that I am not yet allowed to throw away everything and to step out of the line. Maybe this time will come for me soon, but as long as there is the slightest possibility for a chance for the better, I have to keep on, and therefore, believing that I may be yet of service, I shall not send in the resignation which I was tempted to do when I first heard of the Washington revolt against me.

Before and after the organizing meeting in Washington, I received press cuttings from all over the country representing me, in telegrams dated from Washington, as a person who "had to leave England because she behaved so aggressively."

I don't know whose interest it was to publish such absolutely unfounded stories. I had to tell you all these things because we cannot work for peace and harmony on the basis of mistrust and discord. 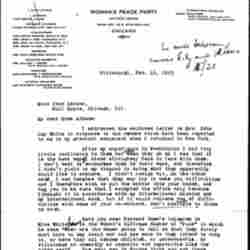