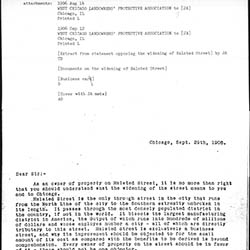 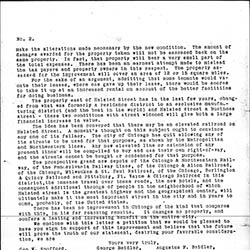 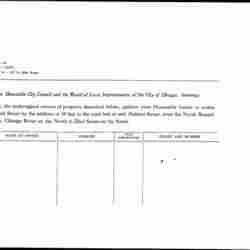 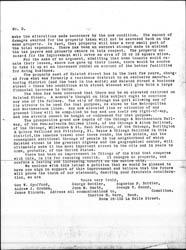 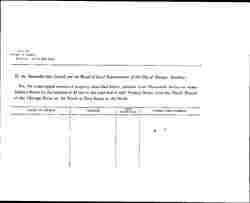 As an owner of property on Halsted Street, it is no more than right that you should understand what the widening of the street means to you and to Chicago.

Halsted Street is the only through street in the city that runs from the North Line of the city to the Southern extremity unbroken in its length. It passes through the most densely populated district in the country, if not the world. It bisects the largest manufacturing district in America, the output of which runs into hundreds of millions of dollars and whose [employees] number a city – all of which are directly tributary to this street. Halsted Street is exclusively a business street, and why its improvement should be objected to for the small amount of its cost as compared with the benefits to be derived is beyond comprehension. Every owner of a property on the street should be in favor of it – there should not be one objector.

According to the best information that can be had, the facts are as follows:-

The improvement as to cost: – Expert valuators, after careful consideration of all ground values, measurements of the property and buildings and taking into consideration the changes to be made have placed the cost at not to exceed five million dollars and possibly as low as four million dollars.

The property owners on the street who favor the improvement believe that the cost of the improvement will be returned several times over by the increased value of all the property in the street and that any argument against the widening on account of cost is not well taken as is verified in other localities, for instance, as the results of widening Randolph street where values have more than doubled as sales of record shown, and every one in Chicago knows the result of the widening of State street.

As to the interference to business, this feature will depend more on each individual owner than all other causes combined. There is no doubt that each property owner will be allowed to make his own contract for the alteration of his property to conform to the new conditions and the promptness with which he makes such contracts and compels the enforcement of them will reduce the time to a very few days. The plan of [procedure] would be to allow the owners a limited time before the actual tearing up of the street would begin, and by dividing it into districts of four or five blocks, each section would be finished in short time. It will occur to those property owners that Chicago business men do not stop their business because the front of their stores are undergoing repairs.

The assessment for making this improvement will be made in time, and money paid to the owners of the property taken so that they will have it to [page 2] make the alterations made necessary by the new condition. The amount of damages awarded for the property taken will not be assessed back on the same property. In fact, that property will bear a very small part of the total expense. There has always been an earnest attempt made to mislead the tax payers and property owners in this respect. The property assessed for the improvement will cover an area of 12 or 15 square miles.

For the sake of an argument, admitting that some tenants would vacate their leases, where one gave up on their lease, there would be scores to take it up at an increased rental on account of the better facilities for doing business.

The property east of Halsted Street has in the last few years, changed from what was formerly a residence district (and the best in the world) and Halsted Street a business street – these two conditions with street widened will give both a large financial increase in value.

The idea has been conveyed that there may be an elevated railroad on Halsted Street. A moment's thought on this subject out to convince any one of its fallacy. The city of Chicago has quit allowing any of its streets to be used for that purpose, as shown by the Metropolitan and Northwestern lines. Any new elevated line or extension of any present lines will be compelled to buy and use their own right-of-way, and the streets cannot be bought or condemned for that purpose.

The prospective grand new depots of the Chicago & Northwestern Railway, of the Pennsylvania Railway Lines, of the Chicago & Alton Railroad, of the Chicago, Milwaukee & St. Paul Railroad, of the Chicago, Burlington & Quincy Railroad and [Pittsburgh], Ft. Wayne & Chicago Railroad in this district, the immense travel over these roads, the new hotels, and the consequent additional throngs of people in the neighborhood of which Halsted street is the greatest highway and the geographical center, will ultimately make it the most important street in the city and in years to come, probably, of the United States.

There has been no improvement in Chicago of the kind that compares with this, in its far reaching results. It damages no property, and confers a lasting and increasing benefit on the entire city.

We enclose with this letter a petition that we would be pleased to have you sign in support of this improvement and believe that the future will prove the truth of our statement, desiring your favorable consideration, we are

Address all communication to,

To the Honorable City Council and the Board of Local Improvements of the City of Chicago, Greeting:

We, the undersigned owners of property described below, petition your Honorable bodies to widen Halsted Street by the addition of 34 feet to the road bed of said Halsted Street, from the North Branch of the Chicago River on the North to 22nd Street on the South. 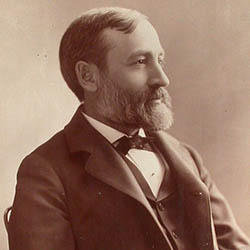 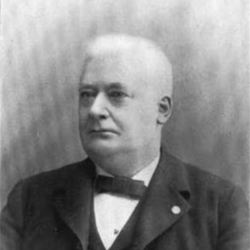 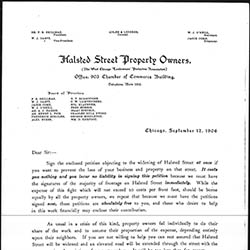 On behalf of his association, Gary writes to Addams about the pros of the widening of Halsted Street.