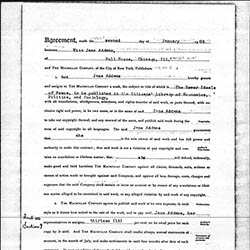 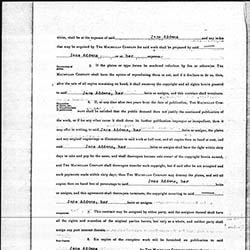 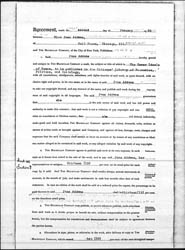 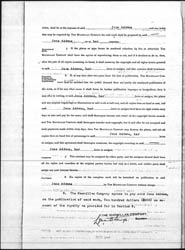 Agreement, made the second day of January 1903 between Miss Jane Addams, of Hull House, Chicago, Ill. and THE MACMILLAN COMPANY, of the City of New York, Publishers.

1. Said Jane Addams hereby grants and assigns to THE MACMILLAN COMPANY a work, the subject or title of which is The Newer Ideals of Peace, to be published in the Citizens' Library of Economies, Politics, and Sociology, with all translations, abridgments, selections, and rights therefor of said work, or parts thereof, with exclusive right and power, in its own name, or in the name of said Jane Addams to take out copyright thereof, and any renewal of the same, and publish said work during the term of said copyright in all languages. The said Jane Addams guarantees that she is the sole owner of said work and has full power and authority to make this contract; that said work is not a violation of any copyright and contains no scandalous or libelous matter, that she will defend, indemnify, make good and hold harmless THE MACMILLAN COMPANY against all claims, demands, suits, actions or causes of action made or brought against said Company, and against all loss, damage, costs, charges and expenses that the said Company shall sustain or incur on account or by reason of any scandalous or libelous matter alleged to be contained in said work, or any alleged violation by said work of any copyright.

2. THE MACMILLAN COMPANY agrees to publish said work at its own expense, in such style as it deems best suited to the sale of the work, and to pay said Jane Addams, her representatives or assigns, thirteen (13) per cent. on its retail price for each copy by it sold. And THE MACMILLAN COMPANY shall render always, annual statements of account, in the month of July, and make settlements in cash four months after date of each statement. In case an edition of the work shall be sold at a reduced price for export, the percentage to be paid thereon to said Jane Addams shall be thirteen (13) per cent. on the American retail price.

3. THE MACMILLAN COMPANY may publish, or permit others to publish, such selections from said work as it thinks proper to benefit its sale, without compensation to the grantor herein, but the compensation for translations and dramatizations shall be subject to agreement between the parties hereto.

4. Alterations in type, plates, or otherwise in the work, after delivery of copy to THE MACMILLAN COMPANY, which exceed ten (10) per cent of the original [page 2] composition, shall be at the expense of said Jane Addams and any index that may be required by THE MACMILLAN COMPANY for said work shall be prepared by said Jane Addams or at her expense.

5. If the plates or type forms be rendered valueless by fire of otherwise THE MACMILLAN COMPANY shall have the option of reproducing them or not, and if it declines to do so, then, after the sale of all copies remaining on hand, it shall reconvey the copyright and all rights herein granted to said Jane Addams, her heirs or assigns, and this contract shall terminate.

7. This contract may be assigned by either party, and the assignee thereof shall have all the rights and remedies of the original parties hereto, but only as a whole, and neither party shall assign any part interest therein.

8. Six copies of the complete work will be furnished on publication to said Jane Addams by THE MACMILLAN COMPANY without charge.

9. The Macmillan Company agrees to pay said Jane Addams, on the publication of said work, Two hundred dollars ($200) on account of the royalty as provided for in Section 2. 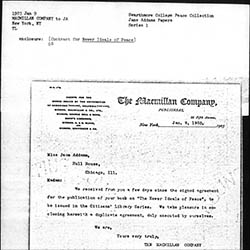 Publication agreement outlining the financial and publishing details for Addams' The Newer Ideals of Peace.