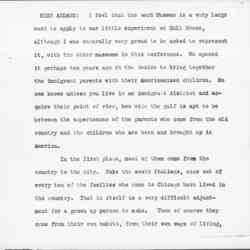 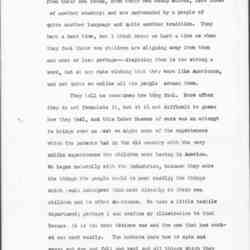 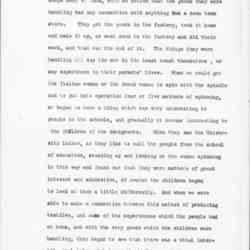 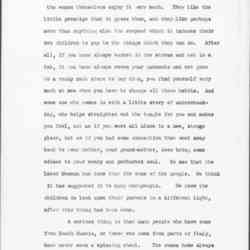 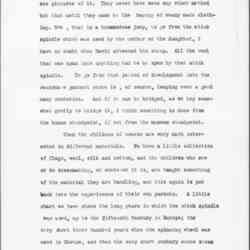 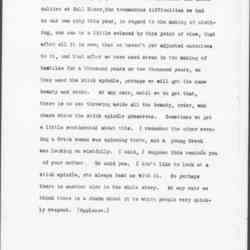 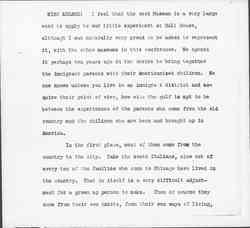 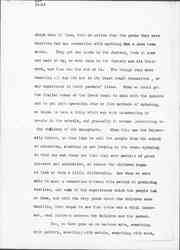 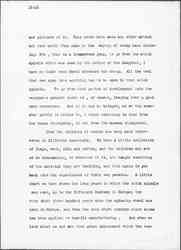 MISS ADDAMS:  I feel that the word Museum is a very large word to apply to our little experiment at Hull House, although I was naturally very proud to be asked to represent it, with the other museums in this conference. We opened it perhaps ten years ago in the desire to bring together the immigrant parents with their Americanized children. No one knows unless you live in an immigrant district and acquire their point of view, how wide the gulf is apt to be between the experiences of the parents who come from the old country and the children who are born and brought up in America.

In the first place, most of them come from the country to the city. Take the south Italians, nine out of every ten of the families who come to Chicago have lived in the country. That in itself is a very difficult adjustment for a grown up person to make. Then of course they come from their own habits, from their own ways of living, [page 2] from their own foods, from their own occupations, into those of another country; and are surrounded by a people of quite another language and quite another tradition. They have a hard time, but I think never so hard a time as when they feel their own children are slipping away from them and more or less perhaps -- [despising] them is too strong a word, but at any rate wishing that they were like Amerians, and not quite so unlike all the people around them.

They tell us sometimes how they feel. More often they do not formulate it, but it is not difficult to guess how they feel, and this Labor Museum of ours was an attempt to bridge over as best we might some of the experiences which the parents had in the old country with the very unlike experiences which the parents had in the old country with the very unlike experiences the children were having in America. We began naturally with the industries, because they were the things the people could do most easily; the things which would interpret them most directly to their own children and to other Americans. We have a little textile department; perhaps I can confine my illustration to that because it is the most obvious one and the one that has worked out most easily. The mothers knew how to spin and weave and dye and full and reel and all things which they employed when they were at home in making textiles. The children here were working in sewing factories, in sweat [page 3] shops many of them, with no notion that the goods they were handling had any connection with anything but a down town store. They got the goods in the factory, took it home and made it up, or went down to the factory and did their work, and that was the end of it. The things they were handling all day did not in the least touch themselves, or any experience in their parents' lives. When we could get the Italian woman or the Greek woman to spin with the spindle and to put into operation four or five methods of spinning, we began to have a thing which was very interesting to people in the schools, and gradually it became interesting to the children of the immigrants. When they saw the University ladies, as they like to call the people from the school of education, standing up and looking at the women spinning in this way and found out that they were matters of great interest and admiration, of course the children began to look at them a little differently. And when we were able to make a connection between this method of producing textiles, and some of the experiences which the people had at home, and with the very goods which the children were handling, they began to see that there was a vital interest, real interest between the children and the parent.

Now, we have gone on in various arts, something with pottery, something with metals, something with wood, [page 4] but nothing has stuck quite so readily as the textiles, and the women themselves enjoy it very much. They like the little prestige that it gives them, and they like perhaps more than anything else the respect which it induces their own children to pay to the things which they can do. After all, if you have always washed in the stream and not in a tub, it you have always woven your garments and not gone to a ready made store to buy them, you find yourself very much at sea when you have to change all those habits. And some one who comes in with a little story of understanding, who helps straighten out the tangle for you and makes you feel, not as if you were all alone in a new, strange place, but as if you had some connection that went away back to your mother, your grandmother, does bring some solace to your weary and perturbed soul. We see that the Labor Museum has done that for some of the people. We think it has suggested it to many more people. We know the children do look upon their parents in a different light, after this thing has been done.

A curious thing is that many people who have come from South Russia, or those who come from parts of Italy, have never seen a spinning wheel. The women have always used a straight stick spindle, or distaff. If you go to the Art Institute which Mr. French has been describing, you will [page 5] see pictures of it. They never have seen any other method but that until they came to the buying of ready made clothing. Now, that is a tremendous jump, to go from the stick spindle which was used by the mother or the daughter, I have no doubt when David attended his sheep. All the wool that was spun into anything had to be spun by that stick spindle. To go from that period of development into the readymade garment store is, of course, leaping over a good many centuries. And if it can be bridged, as we try somewhat gently to bridge it, I think something is done from the human standpoint, if not from the museum standpoint.

Then the children of course are very much interested in different materials. We have a little collection of flags, wool, silk and cotton, and the children who sew or do dressmaking, or whatever it is, are taught something of the material they are handling, and this again is put back into the experiences of their own parents. A little chart we have shows the long years in which the stick spindle was used, up to the Fifteenth Century in Europe; the very short three hundred years when the spinning wheel was used in Europe, and then the very short century since steam has been applied to textile manufacturing. And when we look about us and see that great adjustment which the textile [page 6] industry displays, the tremendous sacrifice and difficulties at Fall River, the tremendous difficulties we had in our own city this year, in regard to the making of clothing, one can be a little solaced by this point of view, that after all it is new; that we haven't yet adjusted ourselves to it, and that after we have used steam in the making of textiles for a thousand years or two thousand years, as they used the stick spindle, perhaps we will get the same beauty and order. At any rate, until we do get that, there is no use throwing aside all the beauty, order, and charm which the stick spindle preserves. Sometimes we get a little sentimental about this. I remember the other evening a Greek woman was spinning there, and a young Greek was looking on wistfully. I said, I suppose this reminds you of your mother. He said yes. I don't like to look at a stick spindle, she always beat me with it. So perhaps there is another side to the whole story. At any rate we think there is a charm about it to which people very quickly respond. (Applause.)