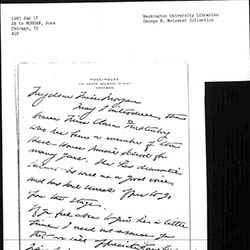 Clara Furstenberg Trachtenberg enjoyed music and preforming. She immigrated from Russia to Chicago in 1891. After arriving, she became an active member of the Hull-House, particularly the Hull-House Music School. Trachtenberg was known to perform in recitals there, as well as at other local functions, usually singing traditional Russian folk songs. Aside from music, Trachtenberg made and sold shirts and hats as a young woman.