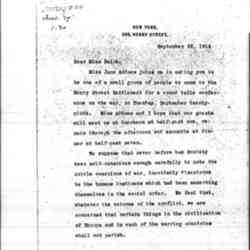 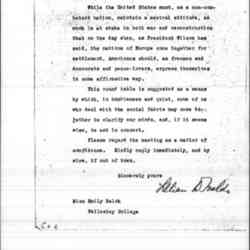 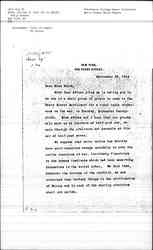 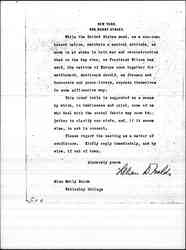 Miss Jane Addams joins me in asking you to be one of a small group of people to come to the Henry Street Settlement for a round table conference on the war, on Tuesday, September twenty-ninth. Miss Addams and I hope that our guests will meet us at luncheon at half-past one, remain through the afternoon and assemble at dinner at half-past seven.

We suppose that never before has Society been self-conscious enough carefully to note the subtle reactions of war, inevitably disastrous to the humane instincts which had been asserting themselves in the social order. We feel that, whatever the outcome of the conflict, we are concerned that certain things in the civilization of Europe and in each of the warring countries shall not perish. [page 2]

While the United States must, as a non-combatant nation, maintain a neutral attitude, so much is at stake in both war and reconstruction that on the day when, as President Wilson has said, the nations of Europe come together for settlement, Americans should, as freemen and democrats and peace-lovers, express themselves in some affirmative way.

This round table is suggested as a means by which, in humbleness and quiet, some of us who deal with the social fabric may come together to clarify our minds, and, if it seems wise, to act in concert.

Please regard the meeting as a matter of confidence. Kindly reply immediately, and by wire, if out of town.

Wald invites Balch to a round-table discussion on peace.