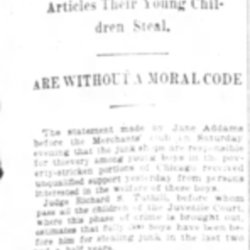 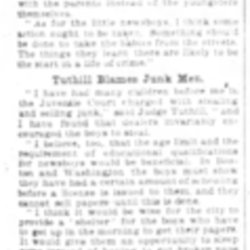 Judge Tuthill and Others Join in the View Expressed by Jane Addams.

Police Say They Dispose of the Articles Their Young Children Steal.

ARE WITHOUT A MORAL CODE.

The statement made by Jane Addams before the Merchants' club on Saturday evening that the junk shops are responsible for thievery among young boys in the poverty-stricken portions of Chicago received unqualified support yesterday from persons interested in the welfare of these boys.

Judge Richard S. Tuthill, before whom pass all the children of the Juvenile Court, where this phase of crime is brought out, estimates that fully 300 boys have been before him for stealing junk in the last two and a half years.

The further statement of Miss Addams that the boys who steal junk are not conscious that they are committing crime is borne out by the results of examination at the bridewell and the Juvenile Court.

The police, however, maintain that the parents are more culpable than the children and that the stolen articles are generally disposed of by the father. Miss Addams made a strong plea for a law prohibiting the buying of junk from a child. There is such an ordinance in force now, and the police say they are enforcing it as well as they can. The ordinance is No. 1805, and provides that no junk shall be purchased from a person under 18 years of age. It provides a fine of from $5 to $50 for each violation.

The great number of junk shops in Chicago lie in the Maxwell Street Police district, and are along or near Canal street. There is a special detail of detectives to watch these places, and a member of the squad last night said that the traffic with children had been reduced to a minimum. He declared that the children are trained to bring home the plunder from their petty thieving and the father negotiates the trade with the dealer.

"If this is the case," said Miss Addams in a further discussion of the matter, "it makes the matter all the worse. But the experience of the workers of the Hull House has been that there are plenty of 'fences' who do business directly with the boys and not with the parents." Many of the Ghetto boys seem to take to the junk business naturally.

"When the foreign parents reach Chicago they find things new and strange, and do not adapt themselves to the changed conditions. Not so with the children, who are bright and pick up things rapidly. They act as interpreters when the agent comes around for the rent or when they go out to buy food, and so it comes that they take up the responsibilities of life at a tender age. They know when poverty pinches, and they go out to pick up scraps of things that may have value so they may bring in money for the family.

"Having been brought up without careful training in morals these children see only the necessity of the people who have come to be dependent on them, and it follows that they will take things which belong to others as well as the scraps that are found on the street.

Would Divide the Blame.

"The parent should be [held] more responsible for this, for it is not fair to put all of the blame on the child. The child is praised when it brings in money, and its natural incentive is to get more. The compulsory education law should be amended in the same direction, for the authorities ought to deal with the parents instead of the youngsters themselves.

"As for the little newsboys, I think some action ought to be taken. Something should be done to take the babies from the streets. The things they learn there are likely to be the start in a life of crime."

"I have had many children before me in the Juvenile Court charged with stealing and selling junk," said Judge Tuthill," and I have found that dealers invariably encouraged the boys to steal.

"I believe, too, that the age limit and the requirement of educational qualifications for newsboys would be beneficial. In Boston and Washington the boys must show they have had a certain amount of schooling before a license is issued to them, and they cannot sell papers until this is done.

"I think it would be wise for the city to provide a 'shelter' for the boys who have to get up in the morning to get their papers. It would give them an opportunity to sleep some instead of having to get broken naps in some deserted corner."

The records at the bridewell bear out the statements of Miss Addams.

"I have had many young boys in the house of correction whose greatest concern during their imprisonment was the condition of their families," said Superintendent Sloan. "The tendency of these boys is to pick up the things that can be used at home -- the coal from the tracks and the refuse food supplies in the market places. They do not always discriminate between that which is on the ground and the supplies in cars and wagons.

"That is the beginning, and after it comes the other petty depredations, including the things that can be sold to the junk man.

"We had 665 boys here last year, and one-third of them were committed for stealing small articles. I have no doubt but that the most of them were disposed of at the junk shops.

"Some of the boys do not know stealing is wrong. We have a Trial board out here, where complaints are settled each day. I have seen the baby eyes of the little fellows open wide when they were told that things they had done were wrong. They had no idea of the moral code.

"Much of the trouble lies in the parents, I think. They tell their children to go out and get things, to beg, or pick up what they can, and what is going to counteract a child's tendency to obey its parents? Strict watch of the junk shops may do a great deal to prevent stealing by children, but the poverty in the home is what leads the children astray." 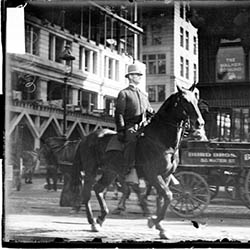