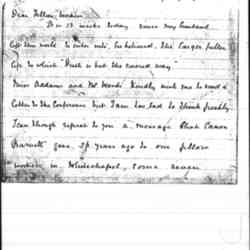 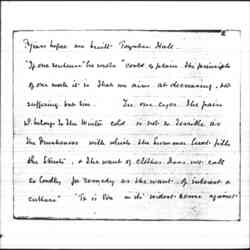 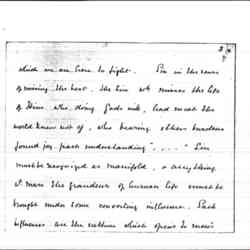 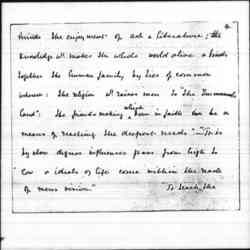 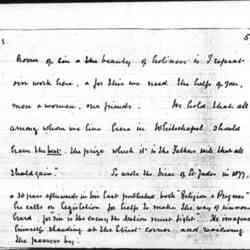 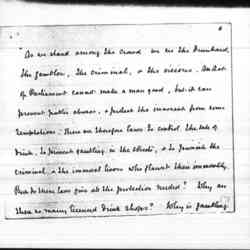 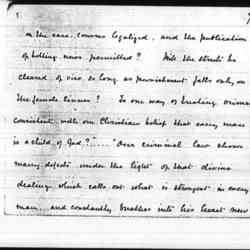 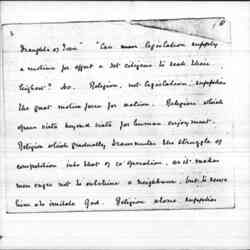 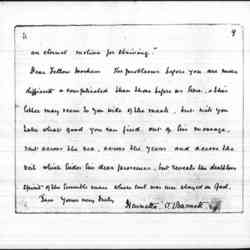 It is 13 weeks today since my husband left this world to enter into, he believed, the larger fuller life to which "Death is but the covered way."

Miss Addams and Mr Woods kindly wish me to send a letter to the Conference but I am too sad to think freshly. I can though repeat to you a message that Canon Barnett gave 36 years ago to our fellow workers in Whitechapel, some seven [page 2] years before we built Toynbee Hall.

"If one sentence" he wrote "could explain the principle of one work it is that we aim at decreasing, not suffering but sin. In our eyes the pain [which] belongs to the winter cold is not so terrible as the [drunkenness] with which the summer heat fills the streets, & the want of clothes does not call so loudly for remedy as the want of interest & culture" "It is sin in its widest sense against [page 3] which we are here to fight. Sin in the sense of missing the best. The sin [which] misses the life of Him who doing Gods will, had meat the world knew not of, who bearing others burdens found joy past understanding" ... "Sin must be recognized as manifold, & anything [which] mars the grandeur of human life must be brought under some converting influence. Such influences are the culture which opens to men's [page 4] minds the enjoyment of art & literature; the knowledge [which] makes the whole world alive & binds together the human family by ties of common interest: the religion [which] raises men to 'the Immanuel's land': the friend-making <which> done in faith can be a means of reaching the deepest needs." "It is by slow degrees influences pass from high to low & ideals of life come within the reach of men's vision."

"To teach the [page 5] honor of sin & the beauty of holiness is I repeat our work here, & for this we need the help of you, men & women, our friends. We hold that all among whom we live here in Whitechapel should have the best. The prize which it is the Father's will that all should gain."

So wrote the Vicar of St Jude's in 1877, & 30 years afterwards in his last published book "Religion & Progress" he calls on legislation for help to make the way of sinners hard, for "sin is the enemy the Nation must fight." He imagines himself standing at the street corner and reviewing the [passersby]. [page 6]

"As we stand among the crowd we see the drunkard, the gambler, the criminal, & the vicious. An Act of Parliament cannot make a man good, but it can prevent public abuses, & protect the innocent from some temptations. There are therefore laws to control the sale of drink, to prevent gambling in the streets, & to punish the criminal & the immoral livers who flaunt their immorality. But do these laws give all the protection needed? Why are there so many licensed drink shops? Why is gambling [page 7] on the race courses legalized, and the publication of [telling?] news permitted? Will the streets be cleared of vice so long as punishment falls only on the female sinner? Is one way of treating crime consistent with our Christian belief that every man is a child of God?" ... "Our criminal law shows many defects under the light of that divine dealing which calls out what is strongest in every man, and constantly breathes into his heart new [page 8] draughts of love" "Can [illegible] legislation supply a motive for effort & set citizens to seek their highest? No. Religion, not legislation, supplies the great motive force for action. Religion which opens vista beyond vista for human enjoyment. Religion which gradually transmutes the struggle of competition into that of [cooperation], as it makes men eager not to outshine a neighbor, but to serve him & to imitate God. Religion alone supplies [page 9] an eternal motive for striving."

Dear Fellow Workers the problems before you are more difficult & complicated than those before us here, & this letter may seem to you wide of the mark, but will you take what good you can find out of his message, sent across the sea, across the years and across the veil which hides his dear presence, but reveals the deathless spirit of the humble man whose soul was ever stayed on God.

I am yours very truly Barnett sends a notice to the National Federation of Settlements from a message that the late Samuel Barnett once delivered.