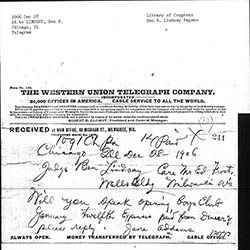 Edward Frost was a lawyer and child welfare activist. He graduated from Harvard with a bachelor's degree in 1884 and passed the bar in 1886. Frost became an accomplished attorney in Milwaukee, Wisconsin. He was heavily involved in the fight against child labor and was especially valuable when it came to the drafting of legislation to protect against child labor. Frost died in 1945.

Ancestry.com
Memoirs of Milwaukee County: From the Earliest Historical Times Down to the Present, Including a Genealogical and Biographical Record of Representative Families in Milwaukee County, Volume 2; Page 434
Prabook