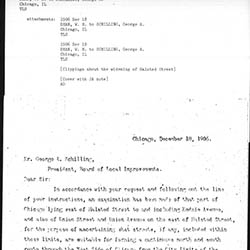 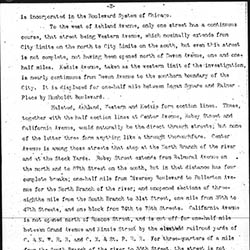 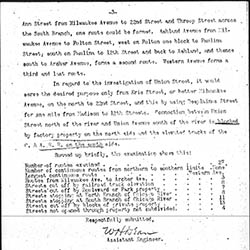 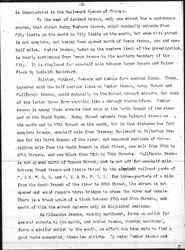 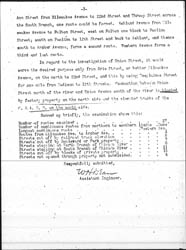 In accordance with your request and following out the line of your instructions, an examination has been made of that part of Chicago lying west of Halsted Street to and including Kedzie Avenue, and also of Union Street and Union Avenue on the east of Halsted Street, for the purpose of ascertaining what streets, if any, included within those limits, are suitable for forming a continuous north and south route through the West Side of Chicago from the City Limits of the north to the City Limits of the south. The object of finding this through route is that the improving of such a thoroughfare will tend to draw away from Halsted Street a considerable portion of the traffic which now passes over it, relieving the present congestion of traffic and lessening the need or demand for the widening of Halsted Street.

The examination shows that all streets lying between Halsted Street and Ashland Avenue are available for this purpose only from the North Branch of the Chicago River on the north to the South Branch of the same on the south, or in a few cases as far south as 39th Street. The Union Stock yards, between 39th and 47th Streets, effectively cut off any opening to the south. Ashland Avenue itself, though passing this obstruction and extending from Edgewater Avenue (or via. N. Clark Street from the City Limits) on the north to 95th Street on the south, does not serve the desired purpose owing to the fact that there exists a break of more than one-half mile between Fullerton Avenue and Clybourn Place, cut off by the North Branch of the river and the C. & N. W. R. R. track elevation, and that the portion lying between Lake and 12th Streets [page 2] is incorporated in the Boulevard System of Chicago.

To the west of Ashland Avenue, only one street has a continuous course, that street being Western Avenue, which nominally extends from City Limits on the north to City Limits on the south, but even this street is not complete, not having been opened north of Devon Avenue, one and one-half miles. Kedzie Avenue, taken as the western limit of the investigation, is nearly continuous from Devon Avenue to the southern boundary of the City. It is displaced for one-half mile between Logan Square and Palmer Place by Humboldt Boulevard.

Halsted, Ashland, Western and Kedzie form section lines.  These, together with the half section lines at Center Avenue, Robey Street and California Avenue, would naturally be the direct through streets; but none of the latter three form anything like a through thoroughfare. Center Avenue is among those streets that stop at the North Branch of the river and at the Stock yards. Robey Street extends from Balmoral Avenue on the north and to 87th Street on the south, but in that distance has four complete breaks; one-half mile from Diversey Boulevard to Fullerton Avenue for the North Branch of the river; and unopened sections of three-eighths mile from the South Branch to 31st Street, one mile from 39th to 47th Streets, and one block from 74th to 75th Streets. California Avenue is not opened north of Roscoe Street, and is cut off for one-half mile between Grand Avenue and Kinzie Street by the elevated railroad yards of C. & N. W. R. R. and C. M. & St. P. R. R. For three-quarters of a mile from the South Branch of the river to 35th Street, the street is not opened and would require three bridges to cross the river and canals. There is a break again of a block between 37th and 38th Streets, and south of this the street extends only in disjointed sections.

As Milwaukee Avenue, running northwest, forms an outlet for several streets to the north, and Archer Avenue, running southwest, forms a similar outlet to the south, an effort has been made to find a good route connecting these two streets. By using Center Avenue and [page 3] Ann Street from Milwaukee Avenue to 22nd Street and Throop Street across the South Branch, one route could be formed.  Ashland Avenue from Milwaukee Avenue to Fulton Street, west on Fulton one block to Paulina Street, south on Paulina to 12th Street and back to Ashland, and thence south to Archer Avenue, forms a second route. Western Avenue forms a third and last route.

In regard to the investigation of Union Street, it would serve the desired purpose only from Erie Street, or better Milwaukee Avenue, on the north to 22nd Street, and this by using Desplaines Street for one mile from Madison to 12th Streets. Connection between Union Street north of the river and Union Avenue south of the river is blocked by factory property on the north side and the elevated tracks of the C. & A. R. R. on the south side.

Summed up briefly, the examination shows this:

Number of continuous routes from northern to southern limits ...  None

Streets cut off by Boulevard or Park property ... 7

Streets cut off by blocks of private property ... 13

Streets not opened through property not subdivided ... 4 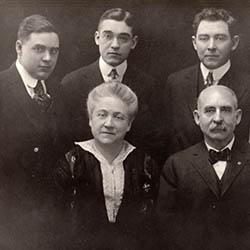 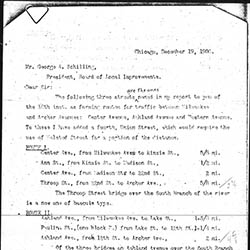 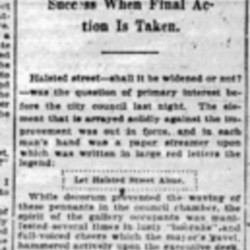 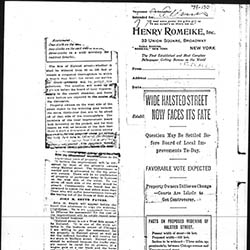 Dean reports on his examination of streets to be widened in order to improve traffic congestion.