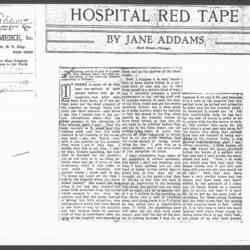 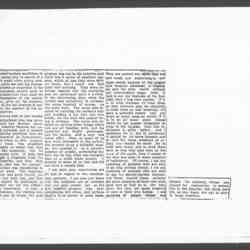 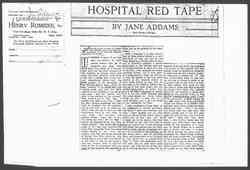 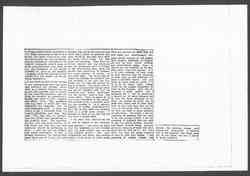 (The following article is part of a paper read by Miss Addams before the ninth annual convention of the American Hospital Association in Chicago.)

It seems to some of us who hear the recitals of poor people before they go to hospitals, and after they come back from them, as if the patient were not the chief concern of the hospital, as though really and truly the chief concern -- and when I say this I realize that it has certain educational sides -- that the chief concern is the education of the [intern], shall I say? That the next concern is in some way the visiting staff, and that the third concern is the training of the nurse, and, shall I say, the fourth concern is the comfort of the patient? Now, when I put it this way, I realize that this is not true; I realize that, broadly speaking, the hospital is founded for the patient; but as you look at it, as these patients come and go, it more or less formulates itself in this order in your mind. For instance, one patient whom I knew said to me, "It broke my heart all the time I was in the hospital when the nurse folded sheets." She meant she was lying in her bed very anxious for some little attention from the nurse which seemed to her very important, and that the nurse, instead of giving this little attention, was taking sheets which had been folded in one kind of way by the laundry and was folding them in another kind of way in accordance with the rules of the hospital and smoothing them out on the shelves of the linen closet.

Now, I suppose it is very important to have sheets folded in a certain kind of way and put in the linen closet in a certain kind of way, and it certainly presents a better appearance to the visiting staff and to outside visitors to open the door of the linen closet and see the sheets carefully folded; but it does seem as if some laundry might be induced to fold the sheets in the first place exactly as the hospital wishes to have them folded, so that they do not need to be refolded before they are put in the linen closet; but the patient lying there is quite conscious of what the nurse is doing, and is all the while wishing, that the nurse should be doing something for her. I give this as a mere incident, and I am sure some of you recognize its truth.

I hear complaints from some of my neighbors of certain nationalities which I shall not mention, and who, I must confess, are not very fond of being bathed every day -- I admit that, so they may not be brought up to me again -- but they do dislike to feel that the bath is such an institution in the morning that when the patient has not slept well at night, and let us assume that at 4 or 5 o'clock in the morning he has fallen into a sort of troubled sleep, and along about 6 or 7 o'clock he has fallen into a comfortable sleep (I think the physicians here will bear me out that such cases occur), and then the call of the doctor is coming between 9 and 10, or between 8:30 and 9:30, and because it is a rule of the hospital that the patient must be bathed and properly in order and the bed properly made, he therefore is roused out of his first comfortable sleep he has had for the last 24 hours in order to be in proper trim for the doctor to look at, that patient who cares for his own sleep a great deal and cares for the doctor very little, that patient feels that his comfort is being sacrificed to the hospital looks, to the general hospitalization, shall I say, of the situation. I have known of one case where the nurse carefully folded the hands of a patient who had just had a bath across the clean sheets and said: "Now, do I wish you would stay like that until the doctor comes, and if you will just keep still and not stir, you would be all right." Now, that may have been a very trustworthy nurse and the doctor may have been very much edified by the spectacle of a clean pair of hands folded on a smooth pair of sheets, but then it is hard for us to get up the same kind of reverence for these young [interns] and the head nurse that the people of the hospital seem to feel. After all, it is very nice to have the ward looking well when these young [interns] come there to pay their visit, but those of us who have known [page 2] [interns] under various conditions in life, these young men in search of a career, like many other young men, we cannot quite see why his impression should seem so important to the hospital managers, should seem so much more important than, shall we say, the impression of the patient himself, for, after all, the hospital, I suppose, in the last analysis is concerned with the comfort of the patients themselves.

I am thinking also of one woman in our neighborhood who was taken very suddenly one Sunday about noon to a hospital because her appendix had ruptered, and it seemed to her attending physician that she must be operated on immediately, so she was taken to this hospital just about noon. The physician was not ready to swear that that was what had happened, but he was reasonably sure. It took two hours to get a diagnosis from the hospital physician, and then they said, "Yes, that was the matter." And the patient was transferred to the surgical ward. The physician by that time was quite frantic, his two hours had been lost, and that operation should be performed at once. I will not tell the difficulties which intervened. It was a Sunday afternoon, the visiting surgeon could not be found the next surgeon was out in the suburbs, and there was a series of excellent reasons, which at one time were written down, but I could not find them this morning. They were excellent reasons why the operation was not performed until 6 o'clock. In the intervening time, when the patient was technically in collapse, the nurse insisted, of course, on the usual bath. The nurse also insisted on combing the patient's hair and braiding it out into two nice braids, all the time the patient being in collapse. The nurse also insisted on various other things which you are all familiar with, and the operation was finally performed, and the patient died a very few hours after. Now, to some of us who were interested in the patient, she seemed to us a valuable woman;  she seemed to us a valuable member of society, performing her duty day by day, what was certainly dear to a great many people; it seemed to some of us that she did not have a square deal.

I am sure your consciences are all bad in regard to the convalescent patients. I am sure you know that the hospitals are so crowded that you push people out at the first possible moment that your consciences will allow, and perhaps even a little sooner in some cases. They are pushed out while they are still weak, and sometimes a collapse comes because of the premature hospital dismissal, or dismissal into the wide world without any intermediary stage. Now, if that is not the business of the hospital, then I beg your pardon. If it is to treat diseases, to treat them so that [interns] may be educated, to treat them so that hospitals will have a splendid record and put down so many cases as cured; if it is to do all those other things which do not appear altogether so clear to the layman, then this indictment is quite unfair, and I apologize for it; but if, perchance, it should be the more humane aim to care for those members of society who cannot be cared for in their own home, and to send them back so that they may take up the work of life again, then it seems to me they are open to some measure of indictment. Of course, I am not speaking of patients who are able to go into private rooms; I am not speaking of patients who are able to pay for special nurses, because, you know, usually those patients get some measure of care -- not such good care as they do at the hospital, but they get some measure of care in their own homes. I am speaking of people whose one chance for recovery, whose one chance for restoration to society lies in the hospital, and those people, as you know, are apt to come in large numbers. 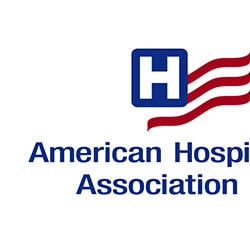 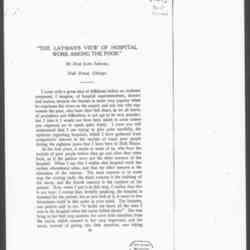 The Layman's View of Hospital Work Among the Poor, September 17, 1907 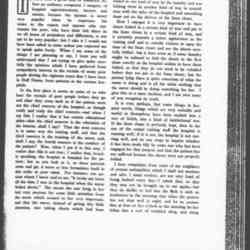 The Layman's View of Hospital Work Among the Poor, October 1907

Addams discusses the experiences of the poor in hospitals. This is an excerpt of her speech, The Layman's View of Hospital Work Among the Poor, from September 17, 1907.