The Campaign for Municipal Suffrage, February 17, 1907 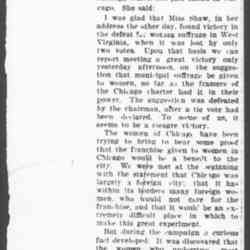 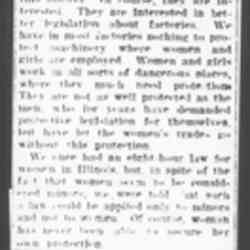 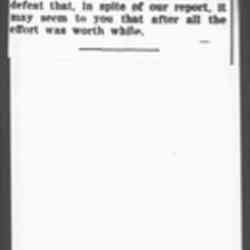 At the Sunday service held in connection with the National Suffrage Convention, Jane Addams spoke on the campaign for municipal woman suffrage which has just closed in Chicago. She said:

I was glad that Miss Shaw, in her address the other day, found victory in the defeat for woman suffrage in West Virginia, when it was lost by only two votes. Upon that basis we can report meeting a great victory only yesterday afternoon, on the suggestion that municipal suffrage be given to women, so far as the framers of the Chicago charter had it in their power. The suggestion was defeated by the chairman, after a tie vote had been declared. To some of us, it seems to be a [meager] victory.

The women of Chicago have been trying to bring to bear some proof that the franchise given to women in Chicago would be a benefit to the city. We were met at the beginning with the statement that Chicago was largely a foreign city; that it has within its border many foreign women, who would not care for the franchise, and that it would be an extremely difficult place in which to make this great experiment.

But during the campaign a curious fact developed. It was discovered that the women who understood most about the municipal franchise and the use of it were certain groups of foreign-born women. Large societies of Scandinavian women came forward and said, quite simply, "Why, of course, in the Scandinavian States, ever since the sixteenth century, women have had a vote in municipal affairs on exactly the same basis on [page 2] which men have the franchise." They did not understand that when they came to this country, where they thought larger powers would be given to them, they would lose the privilege which they had had at home. "This seems to us," they said, "a very strange arrangement in America."

We discovered that women from English speaking States all over the world, outside of America, from Canada, Australia, New Zealand, from all places where English-speaking people live, vote in the large cities, quite as a matter of course, on municipal affairs, and such women now living here could not understand why women who have been accustomed to the suffrage should lose the power to vote on municipal affairs.

We were told that the majority of women in this city do not care for the franchise, and yet the large majority are working women. We found it very easy to get a vigorous response from any group of working women on this subject. Of course, they are interested. They are interested in better legislation about factories. We have in most factories nothing to protect machinery where women and girls are employed. Women and girls work in all sorts of dangerous places, where they much need protection. They are not as well protected as the men, who for years have demanded protective legislation for themselves, but have let the women's trades go without this protection.

We once had an eight-hour law for women in Illinois, but, in spite of the fact that women seem to be considered minors, we were told that such a law could be applied only to minors and not to women. Of course, woman has never been able to secure her own protection.

Another thing was said to us -- that in a large cosmopolitan city, with its wicked characters, if the ballot were placed in the hands of the women of the under world, we should get ourselves into great difficulty. Personally, I have never been so angry as on various occasions when I have been in police courts when these women were brought in and fined and blackmailed at the will of the policeman or the lieutenant who had "brought them in." I believe that nothing would give us such protection and give the police force such purification as putting the ballot into the hands of these very women.

If women are not to be treated and cared for as children, then they should have some protection of their own.

I could go on from argument to argument which we have heard during this campaign, and we were able to refute most of them, not because we had any special power of oratory, but because we went into the facts of the case. After our investigation, the fight came on, and we had the glorious victory [page 3] of losing by one vote!

To be sure, the educational value of such a campaign is not to be overlooked. It did reach women of all sorts, and it brought them together in a new kind of fellowship. The club women of Chicago have done much to help secure legislation to protect children, and we are told that they got on very well without the ballot; yet these women are the ones most active in working to secure the ballot. Mrs. Henrotin, who has been associated with more clubs than any woman here, was chairman of our committee.

It seems to me difficult to understand why it is that the opposition holds out so long. It is due to a certain lack of historic perspective, a belief that, because things have been so so long, they cannot be changed without danger and without overturning of public affairs. Some of us find it hard to be patient. We had hoped to give you the good news that the campaign had been decided in our favor, but perhaps you are so accustomed to defeat that, in spite of our report, it may seem to you that after all the effort was worth while.

A newspaper report and excerpts from Addams' February 17 speech at the National Suffrage Convention, after the defeat of municipal suffrage for women in Chicago.