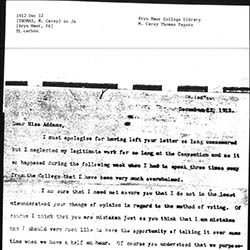 Frances Squire Potter graduated from Elmira College, one of the first women's colleges in the United States, in 1887, and then studied at Cambridge University and the University of Minnesota. She then became a teacher, and and then a professor at the University of Minnesota. In 1909 she was the corresponding secretary of the National American Women Suffrage Association and a general lecturer for the General Federation of Women's Clubs. Potter was later a lecturer for the Women's Trade Union League and the Chairman of the Department of Literature and Library Extension in the General Federation of Women's Clubs. Potter was a member of the Modern Language Association of America, as well as the author of the play Germelshausen, and the books The Ballingtons and The Common School Spelling Book.

Potter married Winfield Scott Potter in 1891. They had four children together: Agnes, Mark, Grace, and Truman. Potter died in 1914.