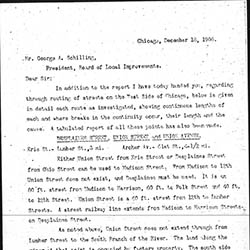 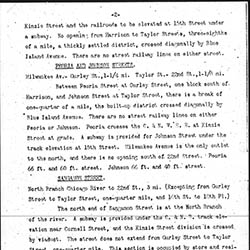 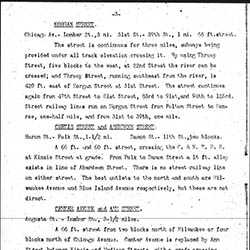 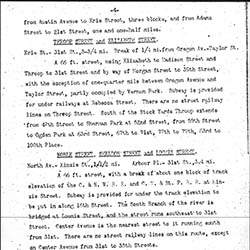 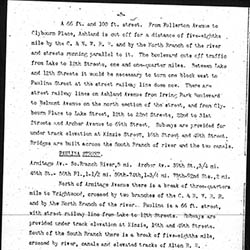 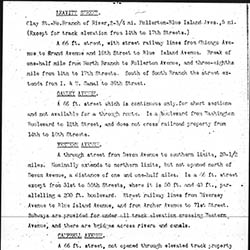 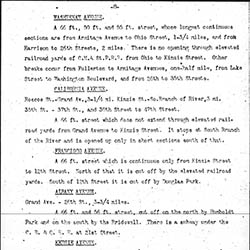 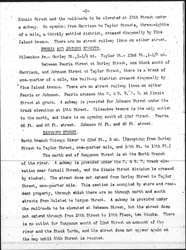 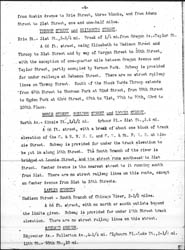 In addition to the report I have today handed you, regarding through routing of streets on the West Side of Chicago, below is given in detail each route as investigated, showing continuous lengths of each and where breaks in the continuity occur, their length and the cause. A tabulated report of all these points has also been made.

As noted above, Union Street does not extend through from Lumber Street to the South Branch of the River.  The land along the river at that point is occupied by factory property.  The south side of the river is occupied by the elevated track of the C. & A. R. R.  Union Avenue commences at Archer Avenue and extends, a 66 ft. street, to 61st Street, and again from 63rd to 81st, 86th to 104th Streets.

A 66 ft. street, crossing the C. & N. W. tracks at grade at [page 2] Kinzie Street and the railroads to be elevated at 15th Street under a subway. No opening from Harrison to Taylor Streets, three-eighths of a mile, a thickly settled district, crossed diagonally by Blue Island Avenue. There are no street railway lines on either street.

Between Peoria Street at Gurley Street, one block south of Harrison, and Johnson Street at Taylor Street, there is a break of one-quarter of a mile, the built up district crossed diagonally by Blue Island Avenue. There are no street railway lines on either Peoria or Johnson. Peoria crosses the C. & N. W. R. R. at Kinzie Street at grade. A subway is proved for Johnson Street under the track elevation at 15th Street. Milwaukee Avenue is the only outlet to the north, and there is no opening south of 22nd Street. Peoria 66 ft. and 60 ft. street. Johnson 66 ft. and 40 ft. street.

The north end of Sangamon Street is at the North Branch of the river. A subway is provided under the C. & N. W. track elevation near Cornell Street, and the Kinzie Street division is crossed by viaduct. The street does not extend from Gurley Street to Taylor Street, one-quarter mile. This section is occupied by store and resident property, through which there are no through north and south streets from Halsted to Morgan Street. A subway is provided under the railroads to be elevated at Rebecca Street, but the street does not extend through from 16th Street to 18th Place, two blocks. There is no outlet for Sangamon south of 22nd Street on account of the river and the Stock yards, and the street does not appear again on the map until 55th Street is reached.

The street is continuous for three miles, subways being provided under all track elevation crossing it. By using Throop Street, five blocks to the west, at 22nd Street the river can be crossed; and Throop Street, running southeast from the river, is 420 ft. east of Morgan Street at 31st Street. The street continues again from 47th Street to 81st Street, 83rd to 91st, and 94th to 123rd. Street railway lines run on Morgan Street from Fulton Street to Monroe, one-half mile, and from 31st to 39th, one mile.

A 66 ft. and 60 ft. street, crossing the C & N. W. R. R. at Kinzie Street at grade. From Polk to Damon Street a 16 ft. alley exists in line of Aberdeen Street. There is no street railway line on either street. The best outlets to the north and south are Milwaukee Avenue and Blue Island Avenue respectively, but these are not direct.

A 66 ft. street from two blocks north of Milwaukee or four blocks north of Chicago Avenue. Center Avenue is replaced by Ann Street between Kinzie and Madison Streets, with a grade crossing between Center Avenue and Ann Street at Kinzie Street. Subway is provided for under the tracks at Rebecca Street. By using Throop Street, two blocks to the west, at 22nd Street the river can be crossed; and Throop Street, running southeast from the river, is 420 ft. east of Morgan Street at 31st Street. South of the Stock Yards Center Avenue is open from 47th to 123rd Streets, except from 81st to 83rd Streets. Street railway lines extend on Center Avenue [page 4] from Austin Avenue to Erie Street, three blocks, and from Adams Street to 21st Street, one and one-half miles.

A 66 ft. street, using Elizabeth to Madison Street and Throop to 31st Street and by way of Morgan Street to 39th Street, with the exception of one-quarter mile between Oregon Avenue and Taylor Street, partly occupied by Vernon Park. Subway is provided for under railways at Rebecca Street.  There are no street railway lines on Throop Street. South of the Stock Yards Throop extends from 47th Street to Sherman Park at 52nd Street, from 55th Street to Ogden Park at 63rd Street, 67th to 71st, 77th to 79th, 83rd to 100th Place.

A 66 ft. street, with a break of about one block of track elevation of the C. & N. W. R. R. and C. M. & St. P. R. R. at Kinzie Street.  Subway is provided for under the track elevation to be put along 16th Street. The South branch of the river is bridged at Loomis Street, and the street runs southeast to 31st Street. Center Avenue is the nearest street to it running south from 31st. There are no street railway lines on this route, except on Center Avenue from 31st to 35th Streets.

A 66 ft. street, with no north or south outlets beyond the limits given. Subway is provided for under 16th Street track elevation. There are no street railway lines on this street.

A 66 ft. and 100 ft. street. From Fullerton Avenue to Clybourn Place, Ashland is cut off for a distance of five-eighths mile by the C. & N. W. R. R. and by the North Branch of the river and streets running parallel to it. The boulevard cuts off traffic from Lake to 12th Streets, one and one-quarter miles. Between Lake and 12th Streets it would be necessary to turn one block west to Paulina Street as the street railway line does now. There are street railway lines on Ashland Avenue from Irving park Boulevard to Belmont Avenue on the north section of the street, and from Clybourn Place to Lake Street, 12th to 22nd Streets, 22nd to 31st Streets and Archer Avenue to 69th Street. Subways are provided for under track elevation at Kinzie Street, 16th Street and 49th Street. Bridges are built across the South Branch of river and the two canals.

North of Armitage Avenue there is a break of three-quarters mile to Wrightwood, crossed by two branches of the C. & N. W. R. R. and by the North Branch of the river. Paulina is a 66 ft. street, with street railway line from Lake to 12th Streets.  Subways are provided under track elevation at Kinzie, 16th and 49th Streets. South of the South branch there is a break of five-eighths mile, crossed by river, canals and elevated tracks of Alton R. R.

A 66 ft. street, with no street railway lines. Does not extend north of Webster Avenue.Subways provided under track elevation at Kinzie and 16th Streets, Alton R. R. and 49th Street.  There is a break of one-half mile at the South Branch of river and the I. and M. Canal. [page 6]

A 66 ft. street with no street railway lines.  Runs into Wood Street at Milwaukee Avenue. It extends north othis limit, but only in short sections of a few blocks each.  At the south branch of the river is a break of one-quarter mile, crossed by river and I. & M. Canal.  To the south it extends in broken sections.  Subways are provided at Kinzie and 16th Streets, Alton R. R. and 49th Street.

A 66 ft. street, with street railway lines from Balmoral Avenue to Irving Park Avenue, Roscoe Street to Belmont Avenue, Fullerton Avenue to 14th Street and from 18th Street to Blue Island Avenue. There is a break of one-half mile between Diversey Boulevard and Fullerton Avenue, crossed by the North Branch of the river. To the south the street extends in disjointed sections from 31st to 39th Streets, 47th to 74th, 75th to 87th. Subways are provided under track elevation of C. & N. W. R. R. at [Kosciuszko] and Kinzie Streets, at 16th Street, the Alton R. R. and at 49th Street.

A 66 ft. street with no street and railway lines. Break of one half mile between Clybourn Avenue and Fullerton Avenue, crossed by the North Branch of the river. Between DeKalb and 12th Streets is a built-up district crossed by Ogden Avenue. Between 14th and 17th Streets there is no subway provided under track elevation. Street south of river extends in sections from 32nd to 37th, 47th to 52nd, 55th to 59th, 61st to 74th and 75th to 79th Streets. Subways are provided at Kinzie Street, Alton R. R. and 49th Street.

A 66 ft. street, with street railway lines from Chicago Avenues to Grand Avenue and 18th Street to Blue Island Avenue. Break of one-half mile from North Branch to Fullerton Avenue, and three-eighths mile from 14th to 17th Streets. South of South Branch the street extends from I. & M. Canal to 39 Street.

A 66 ft. street which is continuous only for short sections and not available for a through route. Is a boulevard from Washington Boulevard to 12th Street, and does not cross railroad property from 14th to 18th Streets.

A through street from Devon Avenue to southern limits, 20-1/2 miles. Nominally extends to northern limits, but not opened north of Devon Avenue, a distance of one and one-half miles. Is a 66 ft. street except from 31st to 55th Streets, where it is 50 ft. and 40 ft., [paralleling] a 200 ft. boulevard. Street railway lines from Diversey Avenue to Blue Island Avenue, and from Archer Avenue to 71st Street. Subways are provided for under all track elevation crossing Western Avenue, and there are bridges across rivers and canals.

A 66 ft. street, not opened through elevated track property of C. M. & St. P. R. R. at Kinzie Street, and is occupied by railroad tracks from 14th to 37th Streets.

A 66 ft., 50 ft. and 55 ft. street, whose longest continuous sections are from Armitage Avenue to Ohio Street, 1-3/4 miles, and from Harrison to 26th Streets, 2 miles. There is no opening through elevated railroad yards of C. M. & St. P. R. R. from Ohio to Kinzie Street. Other breaks occur from Fullerton to Armitage Avenues, one-half mile, from Lake Street to Washington Boulevard, and from 26th to 35th Streets.

A 66 ft. street which does not extend through elevated rail-road yards from Grand Avenue to Kinzie Street. It stops at South Branch of the River and is opened up only in short sections south of that.

A 100 ft., 80 ft. and 66 ft. street, continuous from Devon Avenue on the North to the southern limits, except from one-half mile of boulevard from Logan Square to Palmer Place. Street railway lines extend from Chicago Ave. to 12th St., and from Archer Ave. to 63rd St.