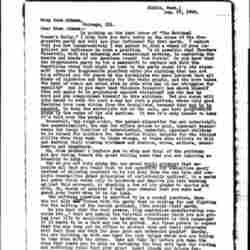 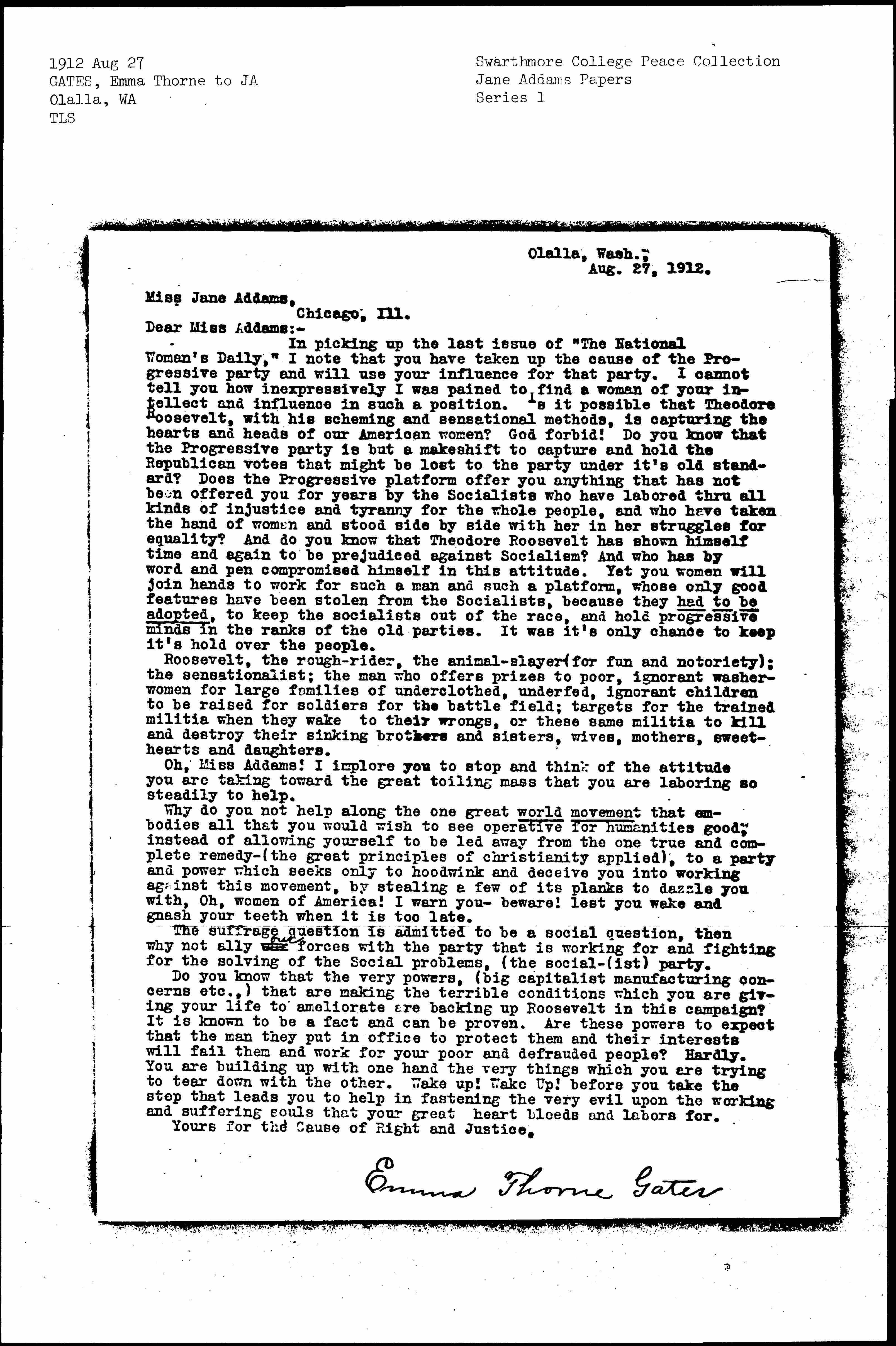 In picking up the last issue of "The National Woman's Daily," I note that you have taken up the cause of the Progressive party and will use your influence for that party. I cannot tell you how inexpressively I was pained to find a woman of your intellect and influence in such a position. Is it possible that Theodore Roosevelt, with his scheming and sensational methods, is capturing the hearts and heads of our American women? God forbid! Do you know that the Progressive party is but a makeshift to capture and hold the Republican votes that might be lost to the party under it's old standard? Does the Progressive platform offer you anything that has not been offered you for years by the Socialists who have labored [through] all kinds of injustice and tyranny for the whole people, and who have taken the hand of women and stood side by side with her in her struggles for equality? And do you know that Theodore Roosevelt has shown himself time and again to be prejudiced against Socialism? And who has by word and pen compromised himself in this attitude. Yet you women will join hands to work for such a man and such a platform, whose only good features have been stolen from the Socialists, because they had to be adopted, to keep the socialists out of the race, and hold progressive minds in the ranks of the old parties. It was it's only chance to keep it's hold over the people.

Roosevelt, the rough-rider, the animal-slayer (for fun and notoriety); the sensationalist; the man who offers prizes to poor, ignorant washer-women for large families of underclothed, underfed, ignorant children to be raised for soldiers for the battle field; targets for the trained militia when they wake to their wrongs, or these same militia to kill and destroy their sinking brothers and sisters, wives, mothers, sweethearts and daughters.

Oh, Miss Addams! I implore you to stop and think of the attitude you are taking toward the great toiling mass that you are laboring so steadily to help.

Why do you not help along the one great world movement that embodies all that you would wish to see operative for humanities good, instead of allowing yourself to be led away from the one true and complete remedy -- (the great principles of christianity applied), to a party and power which seeks only to hoodwink and deceive you into working against this movement, by stealing a few of its planks to dazzle you with, Oh, women of America! I warn you -- beware! lest you wake and gnash your teeth when it is too late.

The suffrage question is admitted to be a social question, then why not ally <our> forces with the party that is working for and fighting for the solving of the Social problems, (the social-(ist) party.

Do you know that the very powers, (big capitalist manufacturing concerns etc.,) that are making the terrible conditions which you are giving your life to ameliorate are backing up Roosevelt in this campaign? It is known to be a fact and can be proven. Are these powers to expect that the man they put in office to protect them and their interests will fail them and work for your poor and defrauded people? Hardly. You are building up with one hand the very things which you are trying to tear down with the other. Wake up! Wake Up! before you take the step that leads you to help in fastening the very evil upon the working and suffering souls that your great heart bleeds and labors for.

Yours for the Cause of Right and Justice,

Gates chastises Addams for supporting Theodore of Roosevelt for President.