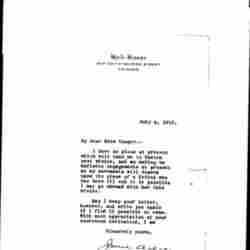 Elizabeth Morgan Cooper was a mathematics teacher. She attended Newnham College, Cambridge University, received a Master's from Bryn Mawr College, and received a Ph.D. from the University of Illinois. She went on to teach mathematics at various girls' secondary schools before becoming principal of the Buckingham School in Cambridge, Massachusetts. In 1937, she became supervisor of mathematics and teacher training at Hunter College and chairman of the mathematics department at Hunter College High School. In 1957, Cooper began teaching at Syracuse University.