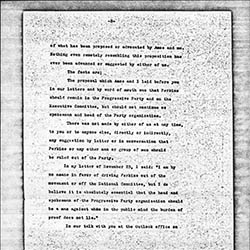 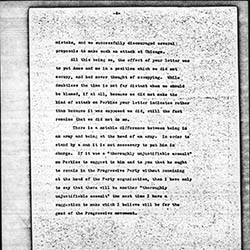 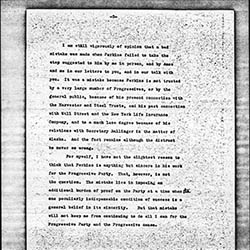 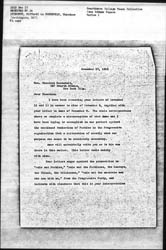 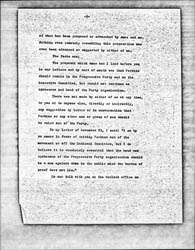 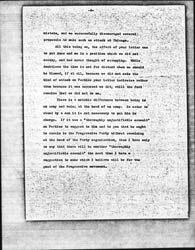 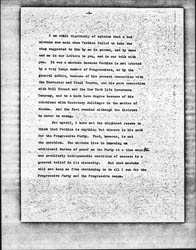 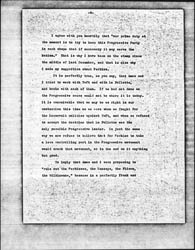 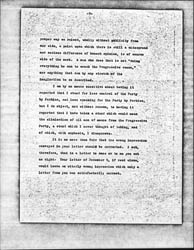 I have been rereading your letters of November 11 and 13 in answer to mine of November 9, together with your letter to Amos of December 5. The whole correspondence shows so complete a misconception of what Amos and I have been trying to accomplish in our protest against the continued domination of Perkins in the Progressive organization that a reiteration of exactly what our purpose was seems to be absolutely necessary.

Amos will undoubtedly write you as to his own share in this matter. This letter deals mainly with mine.

Your letters argue against the proposition to "rule out Perkins," "rule of the Perkinses, the Munseys, the Flinns, the Wilkinsons," "rule out the moderate men who are with us," from the Progressive Party, and indicate with clearness that this is your interpretation [page 2] of what has been proposed or advocated by Amos and me. Nothing even remotely resembling this proposition has ever been advanced or suggested by either of us.

The proposal which Amos and I laid before you in our letters and by word of mouth was that Perkins should remain in the Progressive Party and on the Executive Committee, but should not continue as spokesman and head of the Party organization.

There was not made by either of us at any time, to you or to anyone else, directly or indirectly, any suggestion by letter or in conversation that Perkins or any other man or group of men should be ruled out of the Party.

In my letter of November 23, I said: "I am by no means in favor of driving Perkins out of the movement or off the National Committee, but I do believe it is absolutely essential that the head and spokesman of the Progressive Party organization should be a man against whom in the public mind the burden of proof does not lie."

In our talk with you at the Outlook office on [page 3] Friday, November 29, Amos and I emphatically said to you that in our judgement Perkins should not be forced out of the Party, but that it was undesirable for him to remain as its spokesman; to which you agreed.

During the same conversation I said to you that I saw no reason, provided headquarters were removed to Washington or Chicago and the Chairman of the National Committee took actual charge of the Party organization, why Perkins should not remain as the head of the Executive Committee.

In my conversation with Perkins on Thursday, November 28, I told him specifically that I had no desire whatever to drive him out of the Party organization, but that I did not believe he should continue before the public as its most conspicious representative.

Your letter of November 13 spoke of a reported open attack to be made on Perkins at Chicago. So far as I can recall that was the first time I ever heard such a proposal mentioned.

Amos and I both assured you in New York that in our judgement such an attack would be a serious [page 4] mistake, and we successfully discouraged several proposals to make such an attack at Chicago.

All this being so, the effect of your letter was to put Amos and me in a position which we did not occupy, and had never thought of occupying. While doubtless the time is not far distant when we should be blamed, if at all, because we did not make the kind of attack on Perkins your letter indicates rather than because it was supposed we did, still the fact remains that we did not do so.

I am still vigorously of opinion that a bad mistake was made when Perkins failed to take the step suggested to him by me in person, and by Amos and me in our letters to you, and in our talk with you. It was a mistake because Perkins is not trusted by a very large number of Progressives, or by the general public, because of his present connection with the Harvester and Steel Trusts, and his past connection with Wall Street and the New York Life Insurance Company, and to a much less degree because of his relations with Secretary Ballinger in the matter of Alaska. And the fact remains although the distrust be never so wrong.

For myself, I have not the slightest reason to think that Perkins is anything but sincere in his work for the Progressive Party. That, however, is not the question. The mistake lies in imposing an additional burden of proof on the Party at a time when <the> one peculiarly indispensable condition of success is a general belief in its sincerity. But that mistake will not keep me from continuing to do all I can for the Progressive Party and the Progressive cause. [page 6]

I agree with you heartily that "our prime duty at the moment is to try to keep this Progressive Party in such shape that if necessary it may serve the Nation." That is why I have been on the stump since the middle of last December, and that is also why I made my suggestion about Perkins.

It is perfectly true, as you say, that Amos and I tried to work with Taft and with La Follette, and broke with each of them. If we had no done so the Progressive cause would not be where it is today. It is conceivable that we may be as right in our contention this time as were when we fought for the Roosevelt policies against Taft, and when we refused to accept the doctrine that La Follette was the only possible Progressive leader. In just the same way we now refuse to believe that for Perkins to take a less controlling part in the Progressive movement would wreck that movement, or in the end do it anything but good.

To imply that Amos and I were proposing to "rule out the Perkinses, the Munseys, the Flinns, the Wilkinsons," because in a perfectly frank and [page 7] proper way we raised, wholly without publicity from our side, a point upon which there is still a widespread and serious difference of honest opinion, is of course wide of the mark. A man who does that is not "doing everything he can to wreck the Progressive cause," nor anything that can be any stretch of the imagination be so described.

I am by no means sensitive about having it reported that I stand for less control of the Party by Perkins, and less speaking for the Party by Perkins, but I do object, not without reason, to having it reproted that I have taken a stand which would mean the elimination of all men of means from the Progressive Party, a stand which I never thought of taking, and of which, with emphasis, I disapprove.

It is no more than fair that the wrong impression conveyed in your letter should be corrected. I ask, therefore, that in a letter to Amos or to me you set us right. Your letter of December 5, if read alone, would leave an utterly wrong impression which only a letter from you can satisfactorily correct. [page 8]

Just a word in conclusion. Whatever differences of judgement I may have with you, they will not dim my affection for you, nor cloud the recollection of the good work we have done together. Besides, the success of the Progressive Party means far too much to millions of men, women, and children to let any possible differences stand for one moment in its way. As I understand it, we are fighting for those who have not been able to help themselves, and against those who have helped themselves too freely. That is why I propsoe to go straight ahead, Perkins or no Perkins, with what is <truly> of infinite moment, the work of making life in America better worth living for the great body of our people.

I start for some forest work in North Carolina tonight, to be gone till nearly Christmas. Pinchot clarifies his position on the role of George Perkins in the Progressive Party.