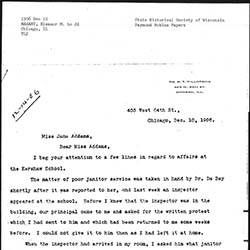 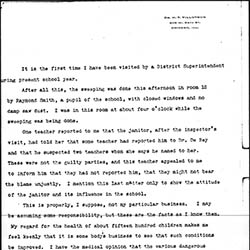 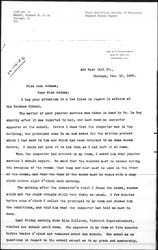 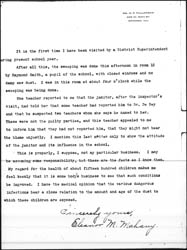 I beg your attention to a few lines in regard to affairs at the Kershaw School.

The matter of poor janitor service was taken in hand by Dr. De Bey shortly after it was reported to her, and last week an inspector appeared at the school. Before I knew that the inspector was in the building, our principal came to me and asked for the written protest which I had sent to him and which had been returned to me some weeks before. I could not give it to him then as I had left it at home.

When the inspector had arrived in my room, I asked him what janitor service I should expect. He said that the windows must be opened during the sweeping of the rooms; that damp saw dust must be used in the front of the rooms, and that the top of the desks must be wiped with a damp cloth before eight o'clock each morning.

The morning after the inspector's visit I found the desks, window sills and the chalk troughs still very dusty as usual. A few minutes before nine o'clock I called the principal to my room and showed him the conditions, and told him what the inspector had told me must be done.

Last Friday morning Miss Ella Sullivan, District Superintendent, visited our school until noon. She appeared in my room at five minutes before twelve o'clock and remained about one minute. She asked me no questions in regard to the school except as to my grade and membership. [page 2]

It is the first time I have been visited by a District Superintendent during present school year.

After all this, the sweeping was done this afternoon in room 12 by Raymond Smith, a pupil of the school, with closed windows and no damp saw dust. I was in this room at about four o'clock while the sweeping was being done.

One teacher reported to me that the janitor, after the inspector's visit, had told her that some teacher had reported him to Dr. De Bay and that he suspected two teachers whom she says he named to her. These were not the guilty parties, and this teacher appealed to me to inform him that they had not reported him, that they might not bear the blame unjustly. I mention this last matter only to show the attitude of the janitor and its influence in the school.

This is properly, I suppose, not my particular business. I may be assuming some responsibility, but these are the facts as I know them. My regard for the health of about fifteen hundred children makes me feel keenly that it is some body's business to see that such conditions be improved. I have the medical opinion that the various dangerous infections bear a close relation to the amount and age of the dust to which these children are exposed.

Mahany writes Addams about janitorial conditions at the Kershaw School.