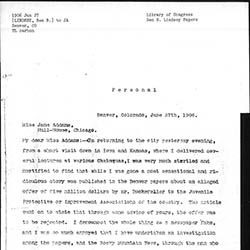 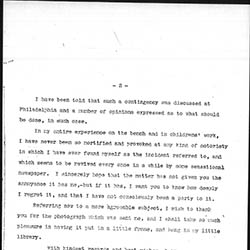 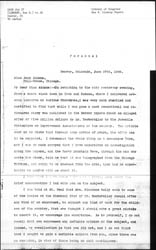 My dear Miss Addams:-- On returning to the city yesterday evening, from a short visit down in Iowa and Kansas, where I delivered several lectures at various [Chautauquas], I was very much startled and mortified to find that while I was gone a most sensational and ridiculous story was published in the Denver papers about an alleged offer of five million dollars by Mr. Rockefeller to the Juvenile Protective or Improvement Associations of the country. The article went on to state that through some advice of yours, the offer was to be rejected. I denounced the whole thing as a newspaper fake, and I was so much annoyed that I have undertaken an investigation among the papers, and the Rocky Mountain News, through the man who wrote the story, told me that it was telegraphed from the Chicago Tribune, and owing to my absence from the city, they had no opportunity to confer with me about it.

I know that I have never talked to a living soul about the brief conversation I had with you on the subject.

I was told at St. Paul that Mrs. Florence [Kelley] said to some of the ladies at the Biennial that if Mr. Rockefeller should offer any kind of an endowment, to support any kind of work for the children of the country, that she thought I should make a great mistake to accept it, or encourage its acceptance. As to yourself, I do not recall that you expressed any definite opinion on the subject, and indeed, my recollection is that you did not, and I do not think that I sought to gain a definite opinion from you, since there was no occasion, in view of there being no such contingency. [page 2]

I have been told that such a contingency was discussed at Philadelphia and a number of opinions expressed as to what should be done, in such case.

In my entire experience on the bench and in childrens' work, I have never been so mortified and provoked at any kind of notoriety in which I have ever found myself as the incident referred to, and which seems to be revived every once in a while by some sensational newspaper. I sincerely hope that the matter has not given you the annoyance it has me,--but if it has, I want you to know how deeply I regret it, and that I have not consciously been a party to it.

Referring now to a more agreeable subject, I wish to thank you for the photograph which was sent me, and I shall take so much pleasure in having it put in a little frame, and hung in my little library.

With kindest regards and best wishes, I am 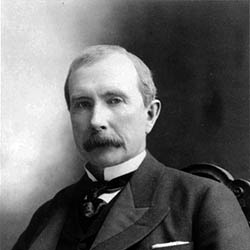 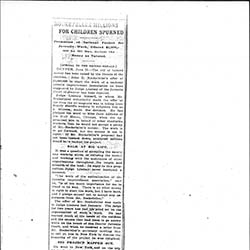 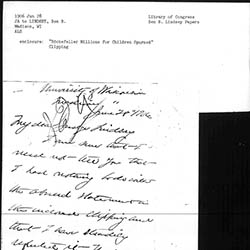