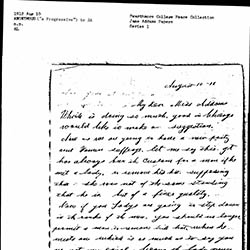 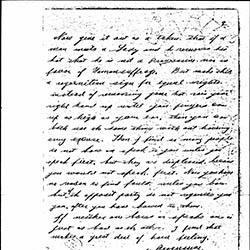 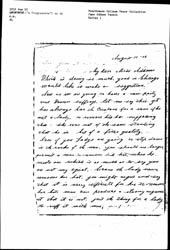 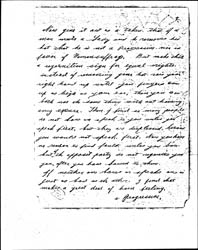 My Dear Miss Addams Which is doing so much good in Chicago would like [to] make a suggestion.

Now as we are going to have a new party and Woman suffrage, let me say this. It has always been in custom for a man if he met a lady, to remove his hat supposing that she was not of the same standing that he is, but of a finer quality.

Now if you [Ladies] are going to step down in [the] ranks of the men, you should no longer permit a man to remove his hat, when he meets one which is as much as to say you are not my equal, because the lady never removes her hat. you might argue and say that it is very difficult for her to remove her hat. man can produce a strong argument that it is not. Just the thing for a lady to ruff it with men; [illegible] [page 2]

Now give it out as a token, that if a man meets a lady and he removes his hat that he is not a Progressive man in favor of Woman suffrage. But make this a recognition sign for equal rights, instead of removing your hat [raise] your right hand up until your fingers are up as high as your ear. Then you can both use the same thing [without] having any excuse. Then I find as many people do not bow or speak to you unless you speak first but they are displeased, because you would not speak first. Now you have no reason to find fault unless you bow but <if> [the] [opposite] party do not [regard] you, after you have bowed to them.

If neither one bows or speaks one is just as bad as the other. I find that makes a great deal of hard feeling.

The author offers his thoughts on woman suffrage and the custom of men tipping their hats to women.