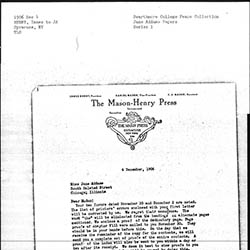 Innes Henry was born in Scotland, immigrating to the United States in 187. He became a naturalized American citizen in 1895. Henry was a printer who worked with the Mason-Henry Press, the printer of Addams' Newer Ideals for Peace in 1906. He later went on to develop real estate in Florida. Henry died in 1960.

Henry married Emily Clara Welch in 1897. They had a daughter, Gladys and a son Herbert Miles.