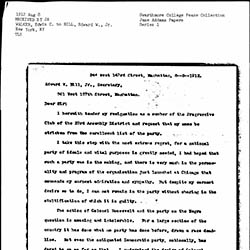 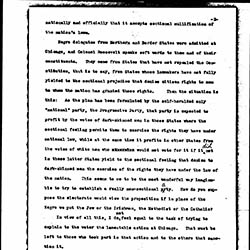 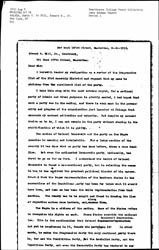 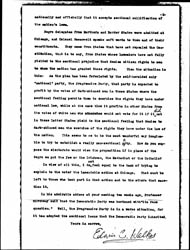 I herewith tender my resignation as a member of the Progressive Club of the 23rd Assembly District and request that my name be stricken from the enrollment list of the party.

I take this step with the most extreme regret, for a national party of ideals and vital purposes is greatly needed, I had hoped that such a party was in the making, and there is very much in the personality and program of the organization just launched at Chicago that commands my earnest admiration and sympathy. But despite my earnest desire so to do, I can not remain in the party without sharing in the stultification of which it is guilty.

The action of Colonel Roosevelt and the party on the Negro question is amazing and intolerable. For a large section of the country it has done what no party has done before, drawn a race deadline. Not even the antiquated Democratic party, nationally, has dared to go so far as that. I understand the desire of Colonel Roosevelt to found a non-sectional party, but in selecting the means he has he has committed the greatest political blunder of his career. Granted that the Negro representation of the Southern States in the conventions of the Republican party has been far below what it should have been, not less so has been the white representation from that section. The remedy was to be sought and found in drawing the line of rejection across race borders, not [illegible] <along> them.

The Negro is a citizen of the nation. Some of the States refuse to recognize his rights as such. These States override the national law. This is the sectionalism that Colonel [illegible] <Roosevelt deprecates.> And yet he acquiesces in it, founds his party upon it! In other words, he makes the Progressive Party the only sectional party there is, for not the Prohibition Party, not the Socialist Party, not the Republican Party, not even the Democratic Party has ventured to say [page 2] nationally and officially that it accepts sectional nullification of the nation's laws.

Negro delegates from Northern and Border States were admitted at Chicago, and Colonel Roosevelt speaks soft words to them and of their constituents. They come from States that have not repealed the Constitution, that is to say, from States whose lawmakers have not fully yielded to the sectional prejudice that denies citizen rights to men to whom the nation has granted those rights. Then the situation is this: As the plan has been formulated by the self-heralded only "national" party, the Progressive Party, that party is expected to profit by the votes of dark-skinned men in those States where the sectional feeling permits them to exercise the rights they have under national law, while at the same time it profits in other States from the votes of white men who [illegible] would not vote for it if it <did> not in these latter States yield to the sectional feeling that denies to dark-skinned men the exercise of the rights they have under the law of the nation. This seems to me to be the most wonderful way imaginable to try to establish a really non-sectional party. How do you suppose the electorate would view the proposition if in place of the Negro we put the Jew or the Irishman, the Methodist or the Catholic?

In view of all this, I do <not> feel equal to the task of trying to explain to the voter the lamentable action at Chicago. That must be left to those who took part in that action and to the others that sanction it.

Walker writes Bill to resign from the 23rd Assembly District Progressive Club, citing Theodore Roosevelt's denial of full rights to African-Americans in the South as sinful and shameful.