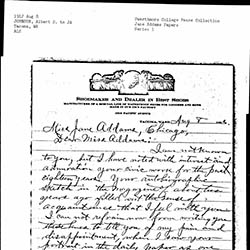 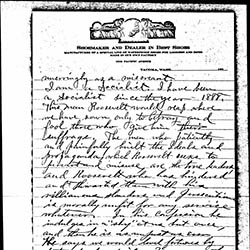 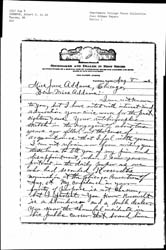 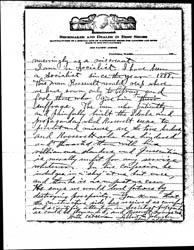 I am not known to you, but I have noted with interest and admiration your civic work for the past eighteen years. Your autobiographic sketch in the magazine of about two years ago filled out the sense of acquaintance that I feel with you. I cannot refrain now from writing you these lines to tell you of my pain and disappointment, when I saw your portrait in the daily paper as one who had seconded Roosevelt's nomination at the Chicago Convention of Aug. 5th, My confidence in your purity of purpose is not shaken, but I protest. You know Roosevelt is a slanderer and a double dealer, you know the shameful incidents in his public career that brand him [page 2] unerringly as a miscreant.

I am a Socialist. I have been a Socialist since the year 1888. This man Roosevelt would reap where we have sown only to betray and fool those who gave him their suffrage. The men who patiently and painfully built the Ideals and propaganda, which Roosevelt seeks to pervert and misuse, are the true leaders, and Roosevelt who has hindered and thwarted them with his villainous slanders and persecutions is morally unfit for any service whatever. In his confession he indulges in a "shy" at us but once, and then he is as unjust as ever. He says we would level fortunes by destroying prosperity. You know that the constructive side has received as careful and scientific attention in Socialist propaganda as could be demanded, and Roosevelt wrongs us with extremes. 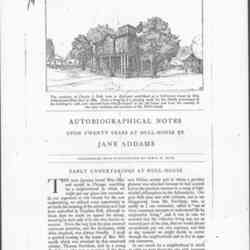 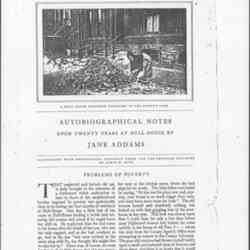 Johnson, a Socialist, writes Addams of his disappoint that she is supporting Theodore Roosevelt for President on the Progressive Party ticket.