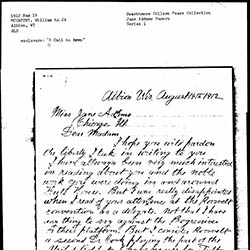 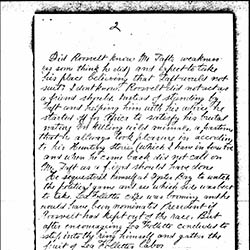 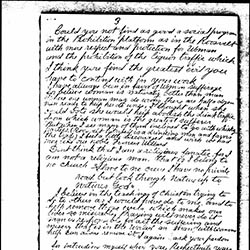 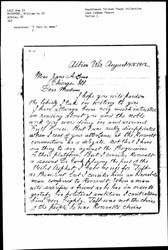 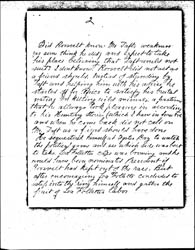 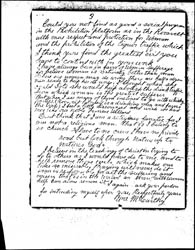 I have [always] been very much interested in reading about you and the noble work you were doing in and around Hull House. But I was really disappointed when I read of your attendance at the Roosevelt convention as a delegate, not that I have [anything] to say against the Progressives or their platform. But I consider Roosevelt a second Dr. Cook playing the part of the Veiled Prophet. I have no use for Taft as President but I consider him an honorable man compared to Roosevelt. When a man will sacrifice a friend as he has in order to gratify his political ambition I can't esteem him very highly. Taft was not the choice of the people, he was Roosevelt's choice [page 2]

Did Roosevelt know Mr Tafts weakness (as some think he did) and expect to take his place believing that Taft would not suit? I don't know. Roosevelt did not act as a friend should. Instead of standing by Taft and helping him with his advice he started off for Africa to satisfy his brutal nature in killing wild animals, a pastime that he [always] took pleasure in according to his Hunting stories (which I have in four vol.) and when he came back did not call on Mr. Taft as a friend should have done

He sequestered himself at Oyster Bay to watch the political game and see which side was best to take. La Follettes cause was booming and he would have been nominated President if Roosevelt had kept out of the race. But after encouraging La Follette concluded to step into the ring himself and gather the fruit of La Follettes labor [page 3]

I have [always] been in favor of Woman suffrage for believe woman is naturally better than man. Where one woman may do wrong there are half a dozen men ready to help her do worse. I thought when she could vote she would help abolish the drink traffic from which woman is the greatest sufferer. But when I see many of them inclined to go with [whiskey] parties, (Roosevelt himself is a drinking man and favors the trade) I feel a little discouraged and wish we had more like our noble Frances Willard

Don't think that I am a religious fanatic for I am not a religious man, that is I belong to no church "slave to no creed I have no private road but look through nature up to natures God"

I believe in the teaching of Christ in trying to do to others as I would have do to me, and to help remove those evils which makes our lives so miserable. Praying will never do it. Man is responsible for all the suffering and misery that is in the world [a] man, with womans help can alone remove it.

I again ask your pardon for intruding myself upon you, Respectfully yours

McCarthy chastises Addams for supporting Theodore Roosevelt whom he says is a dishonorable, political opportunist.