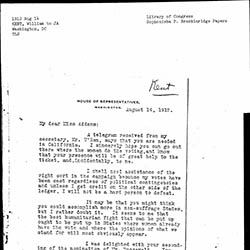 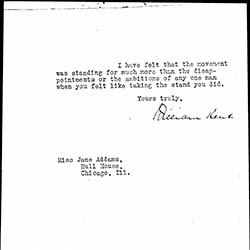 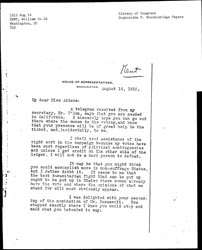 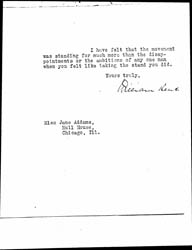 A telegram received from my secretary, Mr. U'Ren, says that you are needed in California. I sincerely hope you can go out there where the women do the voting, and know that your presence will be of great help to the ticket, and, incidentally, to me.

I shall need assistance of the right sort in the campaign because my votes have been cast regardless of political contingencies and unless I get credit on the other side of the ledger, I will not be a hard person to defeat.

It may be that you might think you could accomplish more in non-suffrage States, but I rather doubt it. It seems to me that the best humanitarian fight that can be put up ought to be put up in States where women already have the vote and where the opinions of what we stand for will most obviously appear.

I was delighted with your seconding of the nomination of Mr. Roosevelt. You stopped exactly where I knew you would stop and said what you intended to say. [page 2]

I have felt that the movement was standing for much more than the disappointments or the ambitions of any one man when you felt like taking the stand you did.

Kent asks Addams to campaign for suffrage in states like California, where women already have the vote and to assist him with his reelection.