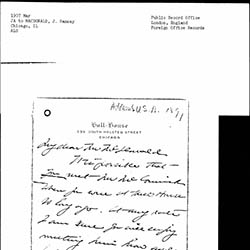 Margaret MacDonald was a social reformer who started social work at a young age, having volunteered for the Charity Organization Society when she was a young adult. In 1894 she became a member of the Women's Industrial Council, and she would go on to serve on many of its committees. From 1904 to 1910, MacDonald helped to found trade schools for women and girls. She was a member of the National Union of Women Workers, the executive board of the National Union of Women's Suffrage Societies. In 1906, MacDonald helped found the Women's Labour League.

MacDonald married Ramsay MacDonald, the future Prime Minister of the United Kingdom, in 1895. They had six children together. McDonald died of blood poisoning in 1911.