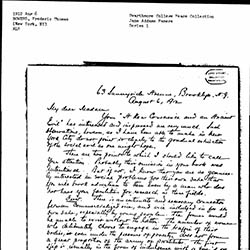 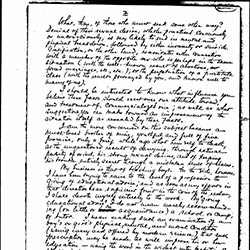 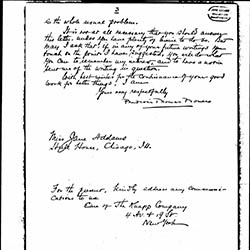 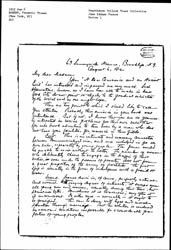 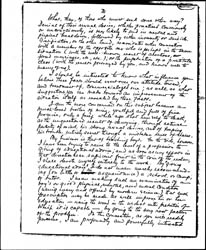 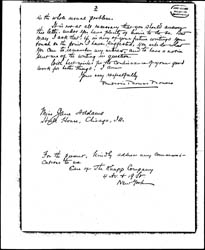 Your "A New Conscience and an Ancient Evil" has interested and impressed me very much. Such observations, however, as I have been able to make in New York City do not point so clearly to the gradual extinction of the social evil as one might hope.

There are two points to which I should like to call your attention. Probably their omission in your book was intentional. But if not, I know that you are so genuinely interested in social problems for their own sake that you will brook advertence to them even by a man who does not have your facilities for research in these fields.

First. There is an intricate and necessary connection between commercialized vice, and vice indulged in for its own sake, especially by young people. The former would be unable to exist without the latter. The number of women who deliberately choose to engage in the traffic of their bodies, is even under the pressure of poverty, does not form a great proportion of the army of prostitutes. The first step is usually in the form of indulgence with a friend or lover.

Second. Sexual desire is, of course, perfectly natural and normal. With varying degrees of intensity, it sweeps over all young men and women, usually during their teens, but sometimes later. Sometimes it is conscious; very often it is unconscious. In either case -- normally -- it ought to be gratified. This can be done with legal and moral sanction through marriage. But this solution is rendered by economic conditions impossible for a considerable proportion of young people. [page 2]

What, then, of those who must seek some other way? Denial of their sexual desire, whether practiced consciously or unconsciously, is very likely to end in mental and physical breakdown, followed by either insanity or suicide. Gratification, on the other land, necessitates either connection with a member of the opposite sex who is perhaps in the same situation (with the well-known, result of abortions, [illegible] forced marriages, etc., etc.); or the perpetuation of a prostitute class (with the results portrayed by you, and known well to many of us).

I should be interested to know what influence you believe these facts should exert over our attitude toward, and treatment of, commercialized vice; as well as what suggestions you can make toward an improvement of the situation itself as revealed by these facts.

I am the more concerned on this subject because a much-loved brother of mine, youthful and full of fine promise, only a brief while ago shot himself to death, as the unquestioned result of denying, through natural purity of mind, his strong, sexual desires, and of keeping his trouble entirely secret through a mistaken sense of shame.

My business is that of teaching boys. On the side, however, I have been trying to raise to the level of a profession the giving of educational advice; and as soon as my efforts in that direction bear sufficient fruit in the coin of the realm, I shall devote myself entirely to the work. By "giving educational advice" I do not mean merely recommending (on little or [illegible] <no> acquaintance) a school, or camp, or tutor. I mean making such an examination of a boy's or girl's physical, mental, and moral condition (using every aid offered by modern science) that such prescription may be made as will improve his or her education -- using the word in the widest interpretation of which it is capable -- by going to the very root factors of the problem. In this connection, as you will readily perceive, I am profoundly and powerfully interested [page 3] in the whole sexual problem.

It is not at all necessary that you should answer this letter, unless you have plenty of leisure to do so. But may I ask that, if in any of your future writings you touch on the points I have suggested, you will do what you can to remember my interest, and to have a notice sent me of the writing in question.

With best wishes for the continuance of your good work for better things, I am

For the present, kindly address any communications to me