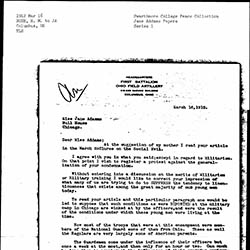 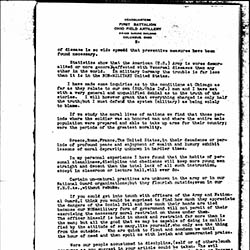 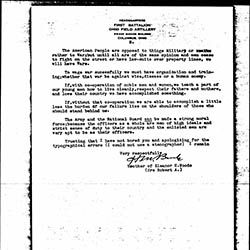 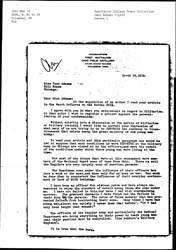 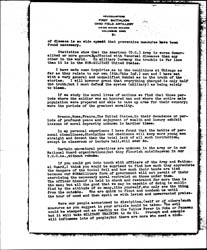 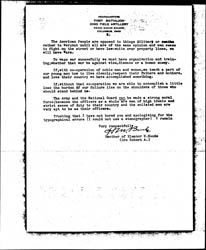 At the suggestion of my mother I read your article in the March McClures on the Social Evil.

I agree with you in what you said; except in regard to Militarism. On that point I wish to register a protest against the generalization of your condemnation.

Without entering into a discussion on the merits of Militarism or Military training I would like to correct your impression of what many of us are trying to do to SUPPRESS the tendency to licentiousness that exists among the great majority of our young men today.

To read your article and this particular paragraph one would be led to suppose that such conditions as were REPORTED at the military camp in Chicago are winked at by the officers, and were the result of the conditions under which these young men were living at the time.

Now most of the troops that were at this encampment were members of the National Guard some of them from Ohio. These as well as the Regulars are very largely sons of American parents.

The Guardsmen come under the influence of their officers but once a week at the most, and then only for an hour or two. Can much be done then to counteract the influences of their everyday environment or lack of HOME training.

I have been an officer for sixteen years and have always endeavored to raise the standard of morals among those who came under me. I have not failed in this; nor have I met with overwhelming success. The greatest obstacle I have found was the failure in their duty by the parents. The curse of false modesty that has prevented fathers from instructing their sons. Many times I have had young men, almost cry out: "Why I never knew that before; if I had only been taught that sooner."

The officers of the Regular Army and particularly the Medical Department are doing everything in their power to teach young men that their passions must be controlled. (See Ashburn's Military Hygiene).

It is true that the curse [page 2] of disease is so [widespread] that preventive measures have been found necessary.

Statistics show that the American (U.S.) Army is worse demoralized or more generally affected with Venereal diseases than any other in the world. In military Germany the trouble is far less than it is in the NON-MILITARY United States.

I have made some inquiries as to the conditions at Chicago as far as they relate to our own (5th. Ohio Inf.) men and I have met with a very general and unqualified denial as to the truth of the stories. I will however grant that everything charged is only half the truth; but I must defend the system (military) as being solely to blame.

If we study the moral lives of nations we find that those periods where the soldier was an honored man and where the entire male population were prepared and able to take up arms for their country; were the periods of greatest morality.

Greece, Rome, France, The United States, in their decadence or periods of profound peace and enjoyment of wealth and luxury exhibit lessons of moral depravity unknown in hardier times.

In my personal experience I have found that the habits of personal cleanliness, discipline and obedience will keep more young men straight and decent than the total lack of all such instruction, except in classroom or lecture hall, will ever do.

Certain [unnatural] practices are unknown in the army or in our National Guard organizations; but they flourish outside; even in our Y.M.C.As., without rebuke.

If you could get into touch with officers of the Army and National Guard, I think you would be surprised to find out how much they appreciate the dangers of the Social Evil and how much their hands are tied because our NON-Military form of government will not permit of their exercising the necessary moral restraint on those under them. The officer himself is held in check and restraint far more than is the man; but all the good that we may be capable of doing is nullified by the attitude of so many, like yourself, who only see the thing from the outside. Who are quick to flout and condemn us until the hour of need and then spoil us with lavish and unwarranted praise.

Were our people accustomed to discipline, (self or of others) such measures as you suggest in your article could be taken. The evil could be stamped out as readily as the Yellow Fever in Cuba or Panama; but it will take MILITARY TRAINING to do it. Precept and example will influence lots of people; but there are more who need a club. [page 3]

The American People are opposed to things Military; or [illegible] rather to War; but until all are of the same opinion and men cease to fight on the street or have law-suits over property lines, we will have Wars.

To wage war successfully we must have organization and training; whether that war be against vice, disease or a human enemy.

If, with [cooperation] of noble men and women, we teach a part of our young men how to live cleanly, respect their fathers and mothers, and love their country we have accomplished something.

If, with that [cooperation] we are able to accomplish a little less the burden [of] our failure lies on the shoulders of those who should stand behind us.

The Army and the National Guard can be made a strong moral force; because the officers as a whole are men of high ideals and strict sense of duty to their country and the enlisted men are very apt to be as their officers. 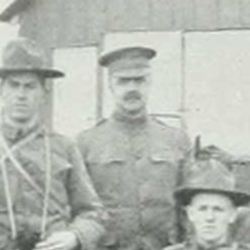 Bush laments that Addams mischaracterized the military's venereal disease problem in her article and offers his opinion on the subject.

Someone, perhaps Jane Addams, wrote "Ans" in the upper margin of the first page.