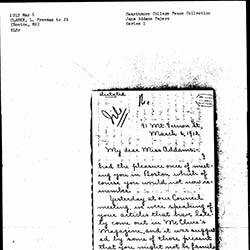 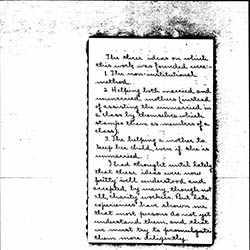 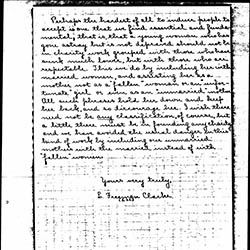 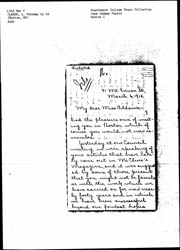 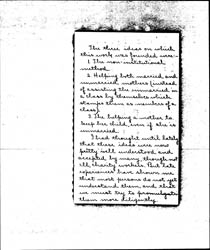 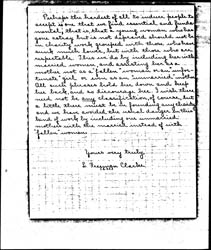 I had the pleasure once of meeting you in Boston which of course you would not now remember.

Yesterday at our Council meeting, we were speaking of your articles that have lately come out in McClure's Magazine, and it was suggested by some of those present that you might not be familiar with the work which we have carried on for now nearly forty years and in which we have been successful beyond our fondest hopes. [page 2]

The three ideas on which this work was founded were: --

2. Helping both married and unmarried mothers (instead of assisting the unmarried in a class by themselves which stamps them as members of a class).

3. The helping a mother to keep her child, even if she is unmarried.

I had thought until lately that these ideas were now pretty well understood and accepted by many, though not all, charity workers. But late experiences have shown me that most persons do not yet understand them, and that we must try to promulgate them more diligently. [page 3]

Perhaps the hardest of all to induce people to accept is one that we find essential and fundamental, that is, that a young woman who has gone astray but is not depraved should not be in charity work grouped with those who have sunk much lower, but with those who are respectable. This we do by including her with married women, and assisting her as a mother not as a "fallen" woman or an "unfortunate" girl or even as an "unmarried" mother. All such phrases hold her down and keep her back, and so discourage her. I wish there need not be any classification, of course, but a little there must be in founding any charity and we have avoided the usual danger in this kind of work by including our unmarried mothers with the married instead of with "fallen" women.

Clarke praises Addams' series of articles in McClure's Magazine and shares the three principles she employs in her work with unmarried mothers.