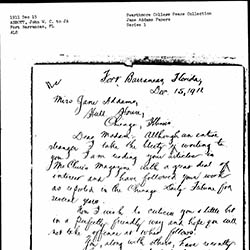 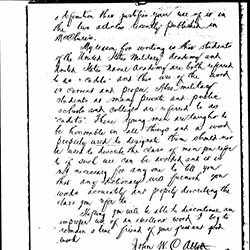 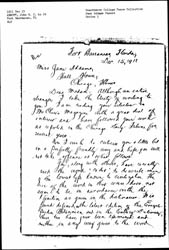 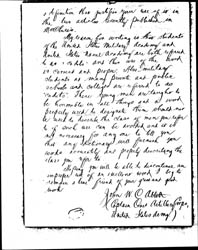 Dear Madam:-  Although an entire stranger I take the liberty of writing to you. I am reading your articles in McClure's Magazine with a great deal of interest and have followed your work as reported in the Chicago Daily Tribune for several years.

Now I wish to [criticize] you a little bit in a perfectly friendly way and hope you will not take [offense] at what follows.

You, along with others, have recently used the word "cadet" to describe men of the lowest type known to civilization. The use of the word in that sense does not seem to be in accordance with the definition as given in the dictionaries. It is found defined in the latest edition of the Encyclopedia Britannica and in the Century Dictionary, these two have just been examined and neither in any way gives to the word [page 2] a definition this justifies your use of it in the two articles recently published in McClure's.

My reason for writing is that students of the United States Military Academy and United States Naval Academy are both referred to as "cadets" and this use of the word is correct and proper. Also military students at many private and public schools and colleges are referred to as "cadets". These young men are taught to be honorable in all things and a word properly used to designate them should not be used to describe the class of men you refer to if such use can be avoided and it is not necessary for any one to tell you that any dictionary will furnish you words accurately and properly describing the class you refer to.

Hoping you will be able to discontinue an improper use of an excellent word I beg to remain a true friend of your great and good work.

Abbott writes Addams to offer a gentle criticism of her negative use of the word "cadet" in her McClure's articles.