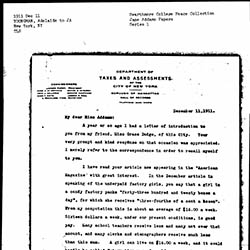 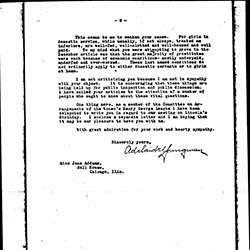 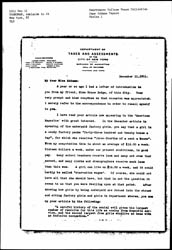 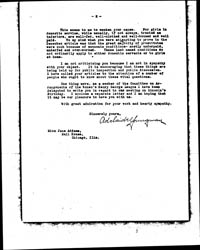 A year or so ago I had a letter of introduction to you from my friend, Miss Grace Dodge, of this City.  Your very prompt and kind response on that occasion was appreciated.  I merely refer to the correspondence in order to recall myself to you.

I have read your article now appearing in the "American Magazine" with great interest.  In the December article in speaking of the underpaid factory girls, you say that a girl in a candy factory packs "forty-three hundred and twenty boxes a day", for which she receives "three-fourths of a cent a dozen". From my computation this is about an average of $16.00 a week. Sixteen dollars a week, under our present conditions, is good pay. Many school teachers receive less and many not over that amount, and many clerks and stenographers receive much less than this sum. A girl can live on $16.00 a week, and it could hardly be called "starvation wages". Of course, she could not have all that she should have, but that is not the question it seems to me that you were dwelling upon at that point. After showing how girls by being underpaid are forced into the street and citing factory girls and girls in department stores, you sum up your article by the following:

"A careful history of the social evil gives the largest number of recruits for this life as coming from domestic service, and the second largest from girls who live at home with no definite occupation." [page 2]

This seems to me to weaken your cause. For girls in domestic service, while usually, if not always, treated as inferiors, are well-fed, well-clothed and well-housed and well paid. To my mind what you were attempting to prove in the December article was that the great majority of prostitutes were such because of economic conditions -- mostly underpaid, underfed and over-worked. These last named conditions do not ordinarily apply to either domestic servants or to girls at home.

I am not criticizing you because I am not in sympathy with your object. It is encouraging that these things are being held up for public inspection and public discussion. I have called your articles to the attention of a number of people who ought to know about these vital questions.

One thing more, as a member of the Committee on Arrangements of the Women's Henry George League I have been delegated to write you in regard to our meeting on Lincoln's Birthday. I enclose a separate letter and I am hoping that it may be our pleasure to have you with us.

With great admiration for your work and hearty sympathy.