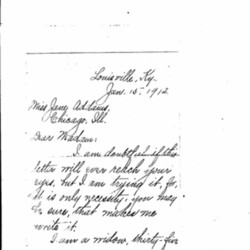 Martha K. Hopkins wanted to work at Hull-House despite discouragement from her friends and wrote to Jane Addams to discuss the possibility. By 1935 she was living in Chicago but worked as a hostess.