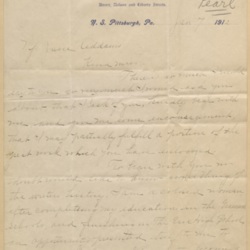 Evelyn Pearl was an African American nurse.  After completing grammar school and high school, she went on to become a nurse at the Frederick Douglass Memorial Hospital. Shortly after, around the year 1912, she became interested in a settlement house for African Americans.