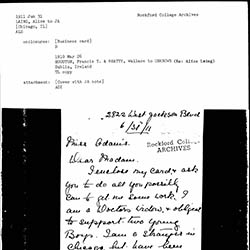 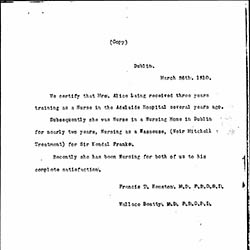 Francis T. Heuston and Wallace Beatty to Whom It May Concern, March 26, 1910 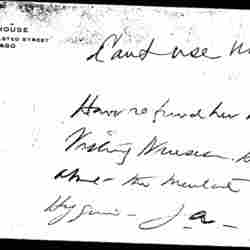 Alice Elizabeth Laing was an Irish nurse who worked and trained at the Adelaide Hospital and worked for a nursing home in Dublin. She also worked as a masseuse for Sir Kendal Franks. She immigrated to the United States in 1911, and in 1914 she received a voucher from the University of Illinois. By 1920 she worked at Ridge Farm Preventorium in Deerfield, Illinois. Laing also worked as a superintendent at a hospital in 1920.

Laing married Dr. George Laing in 1897They had two boys together: George Sutton and Eric. Laing died in 1942.