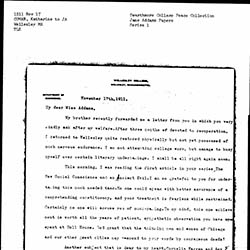 Cornelia Warren was born to a wealthy Boston family and was educated at Miss Gage's School, Miss Hubbard's School and informally at Harvard College and the Massachusetts Institute of Technology, studying philosophy. She wrote a novel, Miss Wilson, in 1892. Warren was deeply interested in educational and social service philanthropy. She worked with Denison House, the Boston Settlement, and served as the treasurer of the College Settlement Association. Warren was also an honorary president of the Consumer's League. She supported the construction of recreational activities for workers at her family-owned paper manufacturing plant and encouraged the library and children's clubs. She supported education for women, including serving on the board of Wellesley College. Warren joined the board of the International Institute for Girls in Spain in 1911, and it became her favorite charitable endeavor.